The Caretaker and the Plague: British Nuclear Weapons Testing in Australia

Ursula Gelis, Executive director of the ‘Global Women’s Association against Nuclear Testing’ works for the rights and needs of victims of nuclear weapons explosions and nuclear testing. Her partners are in Kazakhstan and other states, affected by the long-term effects of nuclear weapons testing. At the Vienna Conference on the Humanitarian Impact of Nuclear Weapons in December 2014[1], she interviewed an anti-nuclear activist and nuclear test victim from Australia. 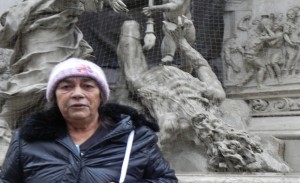 Sue Haseldine in front of the Black Death column in Vienna in December 2014. Photo: Ursula Gelis

The Plague column in Vienna convincingly depicts human suffering; in this case – the tragedy of the Black Death epidemic from 1679 in Austria which killed about 30 000 to 75 000 souls. A Black Death does not distinguish between a noble and a beggar, and a nuclear weapon explosion does not either.

In today’s Australia, Aboriginal communities are still suffering from European racism that came in the aftermath of Captain Cook (1770) who looked at the Aborigines as lucky people, even if they did not own many material goods!

The first inhabitants of Australia, the people who were there ab origine, from the beginning, were food-gathering and hunting people. They arrived about 50,000 years ago.[2]

From region to region, Aboriginal tribes have clear cultural distinctions and their ability to co-exist with nature in a sustainable way could serve as a paradigm for human survival.

Western cultures, still proud of their technological achievements, and apparently committed to poison and to destroy the whole Earth, should listen to indigenous civilizations in order to prevent human extinction.

Aborigines survived best by avoiding contact with ‘White people’. The invaders brought diseases indigenous people had no immunity to resist. Children were taken away by missionaries, claiming that the parents were infidels.[3] Interestingly enough, the church and social Darwinism partnered in suppressing Aborigines. Evolution theory served to justify any brutality: massacres, plundering of goods, rape, etc. The ‘savage’ had to be domesticated and was defined as a race doomed to be extinct.[4]

In 1947 the British government decided to develop their own nuclear weapons program. “In August 1954, the Australian Cabinet agreed to the establishment of a permanent testing ground at a site that became named Maralinga, […] in southwestern South Australia.”[5]

The United Kingdom conducted 12 atmospheric tests between 1952 and 1957 on Australian territories at Maralinga, Emu Fields and Monte Bello Islands. […] During the testing period, roughly 16,000 Australian civilians and servicemen involved in the tests and 22,000 British servicemen were exposed to nuclear fallout.[6]

“Aboriginal people living downwind of the tests and other Australians more distant […] came into contact with airborne radioactivity.”[7]

Sue Coleman-Haseldine (64) from the Kokatha-Mula nation is a survivor of British nuclear weapon testing and spoke at the Vienna conference on the humanitarian impact of nuclear weapons in December 2014[9].

Sue was born in Ceduna, a city about 1000 kilometers straight west from Adelaide, South Australia. Her community, including the local farmers, consists of approximately 4000 people. She grew up nearby, lived in the region all her life and can trace back the family’s history up to her great grand-mother.

“Our knowledge about colonialism started with Captain Cook. My grand grand-father was an Irish man who eventually went back to the white people. Our old people told us not to hate him. They were singing Irish songs to us around the camp fire. My first language was Kokatha, which is also my tribe’s name. Later at school, we had to learn English.”

Sue’s mother’s generation had to follow the colonizer’s order of only speaking English, so Sue was educated to speak her native tongue by her grand-parents as the cultural tradition-keeper. She went to an English school and grew up at a German mission.[10]

Sue always tried to combine traditional life-style with the governmental request of following the ‘British way’. She went out in the bush, kept Aboriginal traditions and educated herself and others. “This was maybe already an act of resistance, I guess”, she said smiling. Sue won the South Australian premier’s award for excellence in indigenous leadership in 2007 for her work as an activist, cultural teacher and environmental defender.[11]

“The elderly people had talked about the Nullarbor[12] dust storm, not knowing that they had seen the fall-out from Maralinga. I knew about Maralinga and started questioning the amount of cancer deaths. This was at the time when I started my own family.

More and more people were dying of leukemia and thyroid cancer. I had doctors remove my thyroids. My grand-daughter got it as well. The official city doctors offered us a radioactive drink to kill the cancer cells but we refused. My husband has heart problems and his family members died from leukemia too. Sometimes people die from ‘unknown causes’.

We learned that the effects of radiation can pass from one generation to the other and can also ‘jump further’ to the third one. When I taught about bush food I felt terribly guilty because I knew about the contamination of the soil. When I spoke to our doctor he simply said that I should carry on teaching about traditional food because we could not do anything about the contamination.”

Entertaining workers of the nuclear program

British servicemen could feel at home among friendly people from the Kokatha-Mula nation. Soldiers were accompanied to the beach during their holidays and Sue vividly remembers those encounters. “They were just ordinary soldiers, away from home and lonely. We became simply friendly with them. Also they had been misused as guinea-pigs. We had no clue that dying might have been already begun.

We were just innocent. We were not allowed to go to Maralinga. I know that the area was poisoned yet we did not know a lot. The old people could feel it, I guess.” –

Recently, “a […] case-control study examined miscarriage in wives and congenital conditions in offspring of the 2007 membership of the British Nuclear Test Veterans Association, a group of ex-servicemen who were stationed at atmospheric nuclear weapon test sites between 1952-67 [was conducted]…”[13]

Sue talks about the ‘Seven Sisters’, the Pleiades star constellation which plays also a role in Aboriginal traditions. The stars are girls who were travelling through Australia being chased by a man. One was caught and killed. Eventually she went up to the skies, followed by her free sisters.

“When we see them from September to March in the Australian skies, we think of them as strong. We are saying that what the sisters bury, man should never dig up because everything buried was poisoned.

My people are still living on contaminated land, because clean-up operations were not sufficient. Before testing, we had to leave our territories. Officials told us that our displacement is for governmental purposes. We had no idea what really was going on in terms of nuclear explosions.

After testing people were sent back, for instance to a place called ‘Old Valley’ on Maralinga lands but Maralinga village was closed off. The government is now thinking to open it as a tourist site.

In terms of measuring radioactivity we are totally cut off from acquiring information because it is illegal to have a Geiger counter! We are particular concerned of the uranium mining industry, exploiting sands found near the former testing site. Plutonium testing took place at the Woomera rocket range site. The place is military territory and we do not know what actually is going on there.”

Overturning the doctrine of terra nullius (land belonging to no-one)

“There was a fellow called Eddie Koiki Mabo fighting for that the native Australians had a prior title to land” ‘taken by the Crown since Cook’s declaration of possession in 1770’.[14]

“Normally rules are not very nice for Aboriginal people. Property rights are splitting communities and devastate families. The government wanted us to prove that we had lived on our land for the last two hundred years. I said no, because this land was given to me by birth and not by the British government. So finally we could seek recognition but the minerals belong to the Crown.”

“Our alliance is well connected and once a month the community leaders link up by phone and we talk about what to do next. During meetings, governmental people are absent. We have international visitors from France, Japan and so on. People from all over the world should know that we do exist, that we are humans (laughter).

We want to stop uranium mining, let us start with banning it for a year first. Then we could probably breathe better…and of course, I do not want any nuclear weapon testing. Nuclear weapons should not exist.

In order to understand our complex societies, it is best to be with us for a while. Our strong connection to the land might be valuable for you to experience. We do not own the land, the land owns us. Come over, a week is plenty of time to convert you into one of us.”

[6] From 1957 to 1958, nine atmospheric tests followed over Christmas Island (Kiritimati) and Malden Island in the central Pacific Ocean, some of which were considerably more powerful than the bombs dropped on Hiroshima and Nagasaki. The remaining 24 UK nuclear tests were conducted jointly with the United States at the Nevada Test Site.

[10] Occasional Paper 3: The struggle for souls and science, constructing the fifth continent: German missionaries and scientists in Australia. The 16 papers in this volume, edited by Professor Walter Veit, explore the contribution of late nineteenth and early twentieth century German scientists and missionaries in the emerging fields of Australian ethnography and linguistics.

Themes within the papers include the study of Aboriginal religion, language, and art, and the conflict between missionaries and the emerging discipline of academic anthropology in Australia and Britain.

Occasional Papers Number 3 also addresses the academic influences, research agendas and methodologies of the German scholars who worked in Australia, as well as the extent to which those scholars dominated the creation of an image of Australia in Europe in both theory and practice. http://artsandmuseums.nt.gov.au/museums/strehlow/manuscripts/publications.

[11] Black Mist. The Impact of Nuclear Weapons on Australia. http://www.icanw.org/wp-content/uploads/2014/02/BlackMist-FINAL-Web.pdf.

[14] The Mabo decision altered the foundation of land law in Australia by overturning the doctrine of terra nullius (land belonging to no-one) on which British claims to possession of Australia were based. This recognition inserted the legal doctrine of native title into Australian law. The judgments of the High Court in the Mabo case recognized the traditional rights of the Meriam people to their islands in the eastern Torres Strait. The Court also held that native title existed for all Indigenous people in Australia prior to the establishment of the British Colony of New South Wales in 1788. In recognizing that Indigenous people in Australia had a prior title to land taken by the Crown since Cook’s declaration of possession in 1770, the Court held that this title exists today in any portion of land where it has not legally been extinguished. The decision of the High Court was swiftly followed by the Native Title Act 1993 (Cth) which attempted to codify the implications of the decision and set out a legislative regime under which Australia’s Indigenous people could seek recognition of their native title rights.