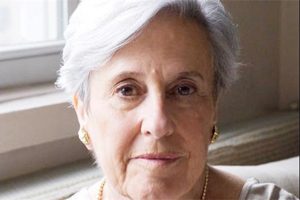 My name is Alice Slater and I’m on the Board of World Beyond War and a UN Representative of the Nuclear Age Peace Foundation. I am so grateful to this Council for stepping up to the plate and taking historic action to finally ban the bomb! I was born in the Bronx and went to Queens College, when tuition was only five dollars a semester, in the 1950s during the terrible Red Scare of the McCarthy era. At the height of the Cold War we had 70,000 nuclear bombs on the planet. There are now 14,000 with about 13,000 bombs held by the US and Russia. The other seven nuclear-armed countries—have 1,000 bombs between them. So it’s really up to us and Russia to move first to negotiate for their abolition as outlined in the new Treaty. At this time, none of the nuclear weapons states and our US partners in NATO, Japan, Australia and South Korea are supporting it.

It may surprise you to know, that Russia has generally been the eager proposer of treaties for verified nuclear and missile disarmament, and, sadly, it is our country, in the grip of the military-industrial complex, that Eisenhower warned against, that provokes the nuclear arms race with Russia, from the time Truman rejected Stalin’s request to put the bomb under UN control, to Reagan, Bush, Clinton, and Obama rejecting Gorbachev and Putin proposals, documented in my submitted testimony, to Trump walking out of the INF Treaty.

Walt Kelly, cartoonist of the Pogo comic strip during the 1950s Red Scare, has Pogo saying, “We met the enemy and he is us!”

We now have a breakthrough opportunity for global grassroots actions in Cities and States to reverse course from plummeting our Earth into catastrophic nuclear disaster. At this moment, there are 2500 nuclear tipped missiles in the US and Russia targeting all of our major cities. As for New York City, as the song goes, “If we can make it here, we’ll make it anywhere!” and it’s wonderful and inspiring that a majority of this City Council is willing to add it’s voice for a nuclear free world! Thank you so much!