I would like to announce that an updated and very much enlarged edition of my book “Science and Society” will very soon be published by World Scientific (in November, 2016). The book can be purchased at a 20% discount at the following address by quoting the code number WSSPPS20. 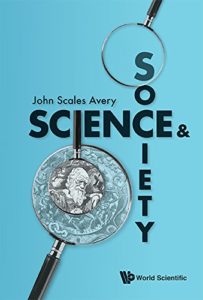 This book has a very interesting history. In 1986, a friend from the World Health Organization called my attention to an essay contest sponsored by the Nuclear Age Peace Foundation. A prize was offered for the best essay on how to give science and engineering students a sense of social responsibility for the consequences of their work. I wrote an essay arguing that the best way to do this would be to introduce a course on the history and social impact of science. It would make students aware of the vast social consequences of scientific and  technological progress, and the sections dealing with modern times would discuss topics such as genetic engineering, nuclear weapons, sustainability and climate change.

My essay did not win the competition, but my WHO friend liked it so much that he translated it into Danish, and we submitted it for publication to “Politiken”, one of Denmark’s largest newspapers. Many students from the University of Copenhagen read my essay in “Politiken”. They came to me and said: “If you really believe what you wrote, then you have to make such a course for us”.

As a result, I started to teach a course which initially had the title “Science, Ethics and Politics”. It was very difficult to get it accepted by the Studies Committee, which thought that science, ethics and politics were three entirely different things, and that they ought not to be connected in any way. Finally I was allowed to give the course under the condition that neither I nor any of the students would get any credit for it.

In spite of these difficulties, the course was a huge success. The audiences were very large and enthusiastic, and we had many distinguished guest speakers. I wrote the book, “Science and Society”, and we used it as a text. The students presented reports on the chapters of the book, and on supplementary books that they had read. We also saw many films, borrowed from the United Nations Information Service, which happened to have an office in Copenhagen.

Finally, when the name of the course was changed to “Science and Society”, the Studies Committee allowed students to get credits for attending it. Meanwhile, the President (Rektor) of the University of Copenhagen, Professor Ove Nathan, was aware of my course and the troubles with the Studies Committee. He kept sending me encouraging notes, telling me to keep on with the project, regardless of how bitterly it was opposed.

Later, Prof. Nathan telephoned to me and asked me to become the Contact Person for Denmark for Pugwash Conferences on Science and World Affairs. They had asked him to do this, but he was too busy with his duties as Rektor. In this way, I became Contact Person for Pugwash, and Chairman of the Danish National Pugwash Group. The Pugwash organization shared the 1995 Nobel Peace Prize for efforts to eliminate nuclear weapons and to peacefully solve global problems related to science. (See www.pugwash.org).

Locally printed editions of “Science and Society”  were used in courses taught not only in Denmark, but also in Sweden, Switzerland, England and Myanmar. In Denmark, there were several other similar courses, for example at the Niels Bohr Institute. In 2001 those of us who taught courses relating to social responsibility wrote to the Danish Minister of Education saying that attendance at such a course ought to be compulsory for all students of science and engineering. The Minister called together the heads of all Danish institutions of higher education, and they accepted the proposal. In 2004, these courses were ready, and they have been given ever since then at all universities and technical institutes in Denmark.

In expanding and updating “Science and Society”, I hope to inform a large public about the very serious  challenges that we are facing today, including threats of catastrophic climate change, thermonuclear war and large-scale global famine. Although many of these problems are the result of the astonishingly rapid growth of science and technology, and the misuse of our increased power over nature, it is not only scientists who need to act to find solutions. Everyone needs to be informed, and everyone must accept responsibility.

I am a little worried by the fact that some of the later chapters in the book require a technical background for full comprehension, but I hope that non-technical readers will just skip over the difficult parts. It would be very good if the book could be used at the high-school or gymnasium level, as well as in colleges and universities.

Finally, here is a link to an article where I have tried to make my Internet publications more easily available: