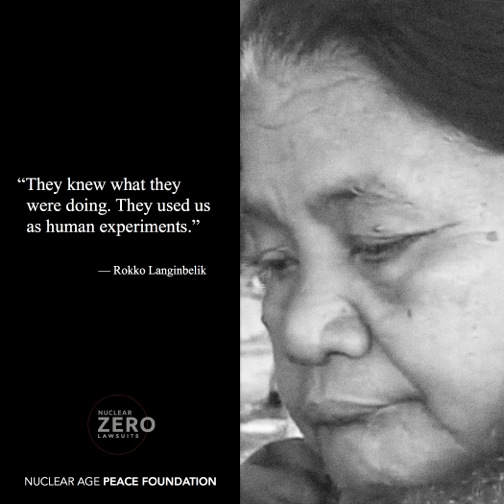 March 1, 1954 should have been just another ordinary day for Rokko Langinbelik. Instead, it was a day that changed her life. Rokko was 12 years old, living on Rongalap Atoll. Life was simple. But on that morning in March, the U.S. detonated the nuclear test known as Bravo on the Bikini Atoll. It was an explosion that would turn out to be 1,000 times more powerful than the Hiroshima bomb.

“It was like the sun was all around us.  And we heard the big thunder. I was very scared. My parents didn’t understand what was happening,” said Rokko.

The explosion sent a radioactive cloud some 20 miles into the atmosphere and created a nuclear hurricane that engulfed Rongelap. The Bravo test had been carried out despite a change in the wind’s direction, and the local residents were not warned ahead of time. Fallout rained down on the unsuspecting islanders – men in their fishing boats, others tending or gathering crops, children at play.

Rokko remembers that after the Bravo explosion, every man, woman and child on Rongelap Atoll was sickened by the yellowish “snow” that fell from the sky and blanketed her island. Both of her parents later died of cancer, as did many other villagers. Rokko herself suffered from thyroid cancer. Two of her children died of complications she believes were associated with the lingering effects of the fallout. The Bravo test was only one of 67 nuclear tests conducted by the U.S. in and around the Marshall Islands between 1946 and 1958.

Rokko traveled to Washington in 2002 with five other Pacific Islanders to tell Congress about how her people have suffered and to seek aid from the United States, stating that to this day, the fallout effects of those tests have never been fully reported. And the emotional and physical toll on the Marshall Islanders may never be completely known or understood.

Rokko Langinbelik, now a soft-spoken grandmother, vows to continue to raise her voice in support of nuclear abolition so that no one else in the world will have to suffer as the people of her country have.