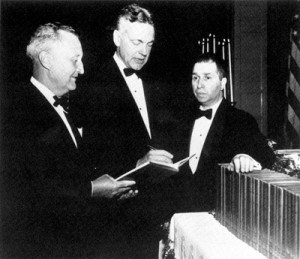 Much of our current work for a more just and peaceful world builds on the thinking and efforts of earlier foundations. An important foundation is the leading role of Robert M. Hutchins, long-time President of the University of Chicago (l929 -1951) whose birth anniversary we mark on 17 January.

Hutchins’ father, William,was President of Berea, a small but important liberal arts college, so Robert Hutchins (1899-1977) was set to follow the family pattern. He went to Yale Law School and stayed on to teach. He quickly became the Dean of the Law School and was spotted as a rising star of US education. When he was 30 years old, he was asked to become President of the University of Chicago, a leading institution. Hutchins was then the youngest president of a US university.

In the first decade of his tenure, the 1930s, his ideas concerning undergraduate education − compulsory survey courses, early admission after two years of secondary school for bright and motivated students, a concentration on “Great Books” – an examination of seminal works of philosophy in particular Plato and Aristotle − divided the University of Chicago faculty. There were strong and outspoken pro and anti Hutchins faculty groups. Moreover Hutchins’ abolition of varsity football and ending the University’s participation in the “Big Ten” university football league distressed some alumni whose link to the university was largely limited to attending football games. For Hutchins, a university was for learning and discussion, not for playing sports. As he famously said “ When I feel like excercizing, I sit down until the feeling goes away.”

It is Hutchins’ creation and leadership of the Committee to Frame a World Constitution in 1945 which makes him one of the intellectual founders of the movement for world federation and world citizenship. After the coming to power of Hitler in Germany in 1933 and his quick decision to ban Jewish professors from teaching in German universities, many Jewish scientists and professors left Germany and came to the USA. Some of the leading natural scientists joined the University of Chicago. Thus began the “Metallurgy Project” as the work on atomic research was officially called.

The University of Chicago team did much of the theoretical research which led to the Atom Bomb. While Hutchins was not directly involved in the atomic project, he understood quickly the nature of atomic energy and its military uses. He saw that the world would never return to a “pre-atomic” condition and that new forms of world organization were needed.

On 12 August 1945, a few days after the use of the atom bombs, Hutchins made a radio address “Atomic Force: Its Meaning for Mankind” in which he outlined the need for strong world institutions, stronger than the UN Charter, whose drafters earlier in the year did not know of the destructive power of atomic energy.

Several professors of the University of Chicago were already active in peace work such as Mortimer Adler, G.A. Borgese, and Richard McKeon, Dean of the undergraduate college. The three approached Hutchins saying that as the University of Chicago had taken a lead in the development of atomic research, so likewise, the university should take the lead in research on adequate world institutions. By November 1945, a 12-person Committee to Frame a World Constitution was created under Hutchins’ chairmanship. The Committee drew largely on existing faculty of the University of Chicago − Wilber Katz, Dean of the Law School and Rexford Tugwell who taught political science but who had been a leading administrator of the Roosevelt New Deal and Governor of Puerto Rico. Two retired professors from outside Chicago were added − Charles McIlwain of Harvard, a specialist on constitutions, and Albert Guerard of Stanford, a French refugee who was concerned about the structure of post-war Europe.

From 1947 to 1951, the Committee published a monthly journal Common Cause many of whose articles still merit reading today as fundamental questions concerning the philosophical basis of government, human rights, distribution of power, and the role of regions are discussed. The Preliminary Draft of a World Constitution was published in 1948 and reprinted in the Saturday Review of Literature edited by Norman Cousins and in the Bulletin of the Atomic Scientists some of whom were in the original “Metallurgy Project”. The Preliminary Draft raised a good deal of discussion, reflected in the issues of Common Cause. There was no second draft. The Preliminary Draft was as G.A. Borgese said, quoting Dante “…of the True City at least the Tower.”

The other lasting aspect of The Preliminary Draft is the crucial role that non-governmental organizations (NGOs) should play. The then recently drafted UN Charter had created a “consultative status” for NGOs, but few of the UN Charter drafters foresaw the important role that NGOs would play as the UN developed. The Preliminary Draft had envisaged a Syndical Senate to represent occupational associations on the lines of the International Labour Organization where trade unions and employer associations have equal standing with government delegates. In 1946, few people saw the important role that the NGOs would later play in UN activities. While there is no “Syndical Senate”, today NGOs represent an important part of the UN process.

Hutchins, however, was also a reflection of his time. There were no women as members of the Committee to Frame a World Constitution, and when he created the Center for the Study of Democratic Institutions with a large number of “fellows”, consultants, and staff, women are also largely absent.

For an understanding of the thinking of those involved in writing The Preliminary Draft see: