Review of Richard Falk’s and David Krieger’s The Path to Zero: Dialogues on Nuclear Dangers

About a third of the way through The Path to Zero, David Krieger, one of the authors, suggests a Zen koan — a mind-bending riddle designed to foster enlightenment — that runs as follows: “What casts a dark shadow when dormant and a fiery cloud of death when brought to life?” The answer is nuclear weapons, the subject of this book.

It is certainly a crucial subject. The contradiction between the potential of nuclear weapons to destroy the world and the determination of nations to possess them is a central dilemma of modern times. More than sixty-seven years after U.S. atomic bombs killed much of the population of two Japanese cities, some 20,000 nuclear weapons — thousands of them on alert — remain housed in the arsenals of nine countries. The United States and Russia possess about 95 percent of them. Moreover, despite a rhetorical commitment to building a nuclear weapons-free world, some nations are undertaking multi-billion dollar programs to modernize their nuclear weapons production facilities, while others appear to be en route to becoming nuclear powers. 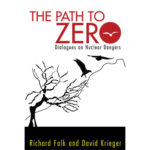 Faced with this disastrous indifference by national governments to the fate of the earth, the people of the world would do well to study The Path to Zero, an extended conversation on the nuclear dilemma by two of its most brilliant, knowledgeable, and profound analysts. Richard Falk is Albert G. Milbank Professor of International Law and Practice Emeritus at Princeton University and currently a research professor at the University of California-Santa Barbara. Krieger is co-founder and president of the Nuclear Age Peace Foundation in Santa Barbara and a Councilor on the World Future Council.

Falk rests his case against “nuclearism” on morality and law. He explains: “It is unacceptable to kill or threaten to kill innocent people on the basis of a weaponry and a strategic doctrine that is indiscriminate in targeting and would almost certainly result in inflicting mass destruction.” At a later point, he adds: “In a democracy, we should be able to insist that our elected government uphold the law and behave ethically in relation to an issue as important as the role of nuclear weaponry. And when that insistence is met with evasion and silence for decades, we are obliged to expose these deficiencies of national governance and, perhaps, extend the discussion to the deficiencies of a world order built on geopolitical premises of hard-power capabilities and the nonaccountability of nuclear weapon states to international law or the UN Charter.”

Like Falk, Krieger makes a powerful case against nuclear weapons. It is not at all clear that nuclear deterrence is effective, he observes. Indeed, “missile defenses are, in effect, an admission that nuclear deterrence is insufficient to prevent a nuclear attack.” Furthermore, the deployment of such defenses by country A “is an incentive for country B to improve the quality and increase the quantity of its nuclear arsenal.” Opposition to preparations for nuclear war, Krieger argues, serves as “a voice of conscience … thereby awakening and engaging others in the struggle for a more decent world.”

Falk and Krieger are not always in agreement. In general, Falk is more dismissive of past nuclear arms control and disarmament activities by governments and somewhat more pessimistic about progress in the future. Not surprisingly, then, while Krieger favors taking a more ameliorative path, Falk calls for a total break with past arms control and disarmament efforts. Indeed, he argues for what he calls “a politics of impossibility” — one focused on a “prudent and rationally desirable end” rather than its apparent political feasibility.

Nonetheless, both individuals share the belief that a nuclear weapons-free world is essential for global survival and concur on specific steps that should be taken toward that goal. Krieger sums up their consensus nicely. “First, we agree that U.S. [government] leadership may be needed but … is unlikely to be forthcoming without considerable pressure from the people. Second, such pressure from below is not currently on the horizon, but we should not give up in our educational efforts to awaken the American people and engage them in a movement to achieve a world free of nuclear weapons.” Third and fourth, observes Krieger, given the absence of U.S. government pressure for disarmament, “we will have to look elsewhere for leadership.” This leadership “could come from the non-nuclear weapon states that are parties to the Non-Proliferation Treaty.” In asserting such leadership, “they would have to band together and make strong demands on the nuclear weapon states” – demands that “might have to be in the form of … delivering an ultimatum to withdraw from the NPT” under the provisions of the treaty’s Article X — unless the nuclear weapon states finally agree to a concrete plan for full-scale nuclear disarmament. They recommend “an initial demand” on the nuclear nations of No First Use, but argue that “the strongest litmus test” of their sincerity would be convening negotiations on a treaty to abolish nuclear weapons.

At the moment, as both men concede, this program does not seem likely to be implemented. Even so, Krieger notes, “the future is always undetermined and subject to change. The currents of history can be redirected by committed individuals and the formation of new institutions. … Creativity and persistence, rooted in hope, can change the world.”

The Path to Zero — a work of great insight and wisdom — is an important part of that global transformation.