Phaeton’s Folly: The Dangerous Reins of the Nuclear Chariot

Pictured above: A mosaic from ancient Rome with the inscription “Know Thyself” in ancient Greek.

Technology and arrogance are a deadly combination. Thousands of years ago, people foresaw the dangers that arise when technology is corrupted by arrogance. In Greek mythology, Icarus and his father, Daedalus, were imprisoned in a tower, but they had a way to escape. Daedalus constructed two pairs of wings out of wax and feathers. Although he warned Icarus not to fly too close to the sun, Icarus did not listen. Blinded by his arrogance, he flew higher and higher until the wax holding his wings together melted. Icarus’s wings were a technological marvel that gave him a chance at freedom, but his arrogant misuse of this technology caused him to fall into the ocean and die.

Greek mythology also tells us of Phaëton, whose father was the sun god Helios. Phaëton wanted to drive his father’s sun chariot, but this arrogant desire led to a disaster. Helios was a mighty deity with the power to drive his sun chariot on a safe path across the sky, but Phaëton was half human and wanted to do what only a god could do. Unable to handle the reins, Phaëton lost control of the sun chariot and could not stop it from plunging toward the earth. Plato writes that “[Phaëton] burnt up all that was upon the earth, and was himself destroyed by a thunderbolt [from Zeus].”[i] 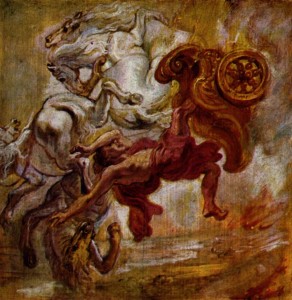 A painting by Peter Paul Rubens of Phaëton falling from the sky.

The heat from our sun is generated by a nuclear reaction deep within its core. Our sun’s nuclear reaction is at a safe distance of 93 million miles away, but during the 1940s people began creating dangerous nuclear reactions on our planet. Just as Phaëton believed he could control the sun chariot, many believe we can control the thousands of nuclear weapons around the world. We have narrowly avoided nuclear annihilation in the past, and in the age of terrorism our grip on the nuclear reins is slipping.

If we lose control of the nuclear chariot we will suffer the same tragedy that befell Phaëton. And if any survive they too will write about how we “burnt up all that was upon the earth.” The story of Icarus tells us that some technology, like flight, must be used responsibly or we will get ourselves killed. The tragedy of Phaëton tells us that some technology, like a nuclear weapons arsenal capable of destroying humanity, is a disaster waiting to happen in the hands of fallible human beings.[ii]

The ancient Greeks probably could not foresee weapons as destructive as nuclear weapons, but they were well aware of human imperfection. Our fallibility as human beings is what ultimately makes nuclear weapons so dangerous. According to John F. Kennedy, nuclear holocaust can result from accident, miscalculation, or madness, which are all products of human fallibility.

In ancient Greece, the words “Know thyself” were inscribed at the temple at Delphi. Today many people use this saying to emphasize the importance of introspection, but in ancient Greece this saying meant something different. Back then “Know thyself” meant that you should know what kind of creature you are.[iii] Know that you are not a god. Know the limitations that result from being human. Know that you are mortal and fallible. The ancient Greeks realized that human beings who don’t know themselves in this way, who believe they are god-like, are extremely dangerous.

The only reason nuclear weapons are dangerous is because we are fallible. If we were infallible, perfect, and truly godlike, nuclear weapons would not be a problem. In fact, humanity would not have any problems.[iv]

Humanity’s arrogance as a species is understandable. In religions throughout history, the sun has been depicted as either created by God, or the embodiment of God. Before Albert Einstein created his equation E=mc2, nobody in the world knew how the sun shined. What kind of fuel source could allow an object to burn so brightly for so many eons? It was a great mystery. Many people reasoned that the sun must be using a fuel source much more powerful than wood, oil, or coal, but what could it be? Einstein’s equation revealed that the sun’s fuel came from a nuclear reaction that converted matter into energy. By learning this secret of the sun, humanity gained an ability that seemed god-like. In religions and mythologies around the world, only gods could control solar fire. By unlocking the mystery of solar fire, humanity gained control of the nuclear chariot, and with it we gained Phaëton’s ability to annihilate ourselves and all those around us.

The story of nuclear weapons did not begin in 1945 with the dropping of two atomic bombs on Japan. The story of nuclear weapons began ages ago, because it reflects a deeper story about the human condition. It is a story about our timeless struggle to reconcile the reality of our fallibility with our desire to be god-like. Since no human is perfect, who can be trusted with weapons capable of annihilating most life on our planet? As John F. Kennedy realized, all political leaders are vulnerable to accident, miscalculation, or madness, which are all products of human fallibility. If political leaders were not vulnerable in this way, they would not be human.

Every religion, philosophy, and scientific school of thought recognizes that human beings are fallible and imperfect. Every technology and system we have ever created is also fallible and imperfect, just like us. There has never been a car, computer, or any human invention ever made that is perfect, invulnerable to error, and incapable of breaking. Nuclear weapons and the system that sustains them are imperfect, just like every technology and system that human beings have ever created.

Humanity’s arrogant belief that it can control a vast nuclear weapons arsenal may lead to violence on an unprecedented scale, in the form of a nuclear holocaust. The word “hubris” was a Greek term that referred to wanton violence resulting from arrogance. In Greek mythology, the female deity Nemesis punished those guilty of hubris. If humanity loses control of the nuclear chariot, it will not just be nuclear weapons that cause our world to burn with solar fire. If the nuclear chariot wrecks our planet, it will also be because of fallibility, hubris, and the metaphorical goddess Nemesis. Nuclear weapons are a symptom of much deeper problems, such as the myth of nuclear deterrence and the confusion about what it means to be human.

[ii] This piece is adapted from my book Peaceful Revolution.