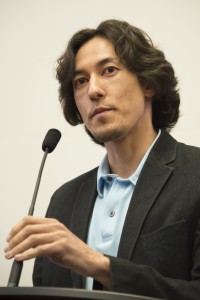 NAPF Peace Leadership Director Paul K. Chappell touched a part of civil rights history on March 29 as keynote speaker for the Durr Lecture Series at Auburn University in Montgomery, Alabama. Chappell, who grew up in Huntsville, helped to bring closure to a time period of remembering. Only several days earlier, at the reenactment of the conclusion of the civil rights march from Selma to the steps of the Alabama State Capitol in Montgomery, Bernice King, daughter of Dr. Martin Luther King, Jr., and Peggy Wallace Kennedy, daughter of Governor George Wallace, hugged and held hands in prayer.

The Durr Lecture Series, now in its 24th year, honors the work of Montgomery white civil rights activists Clifford and Virginia Durr, who bailed Rosa Parks out of jail after that fateful event in 1955 that would eventually change a nation. Clifford Durr, a Rhodes Scholar and lawyer, had fought the Truman Administration on constitutional rights. He and his wife Virginia also opened their home to civil rights organizers traveling throughout the south, earning the enmity of a large white and angry community. Virginia Durr was also a member of the NAACP.

It was another Virginia Durr, daughter “Tilla” Durr, who introduced West Point graduate Paul Chappell who is part African-American, part Asian, and part Caucasian, and has dedicated his life to the study of war and peace. In introducing his talk on “Why Peace Is Possible: Exploring the Anatomy of Violence and War,” Tilla Durr explained how Paul’s writing and work had changed her life.

“He gave me renewed hope that all the heroic sacrifices and courageous moral stands have landed us all on the right side of history.”

Growing up in Alabama, Chappell explained he was born when his half-white and half-black father was 54 years old. “My father was from the pre-civil rights era and because I was part black and part Asian, I was told that the military was the only place where I would have the opportunity to succeed.”

Tilla commented, “Paul’s writings remind us to nonviolently challenge and protest unjust systems in order to bring about needed reform…he somehow has the ability to channel long-dead prophets to revive their messages for the new age and for the future.”

Among many topics, Chappell discussed how, from a military perspective, Gandhi and Martin Luther King, Jr. were strategic geniuses, more brilliant and innovative than any general in history. They were courageous warriors who advanced a more effective method than waging war for providing national and global security. “Gandhi said, ‘I am a soldier, but a solider of peace.’ Martin Luther King, Jr. said, ‘In the nonviolent army, there is room for everyone who wants to join.’”

“Paul is a true soldier of peace if there ever was one….” Tilla Durr said. “He is providing hope for a new generation, specific and realistic hope as defined in our rich civil rights tradition.” In Paul Chappell, Tilla Durr sees a reflection of her parents’ work―a new legacy that will stretch into the future and for many generations to come.