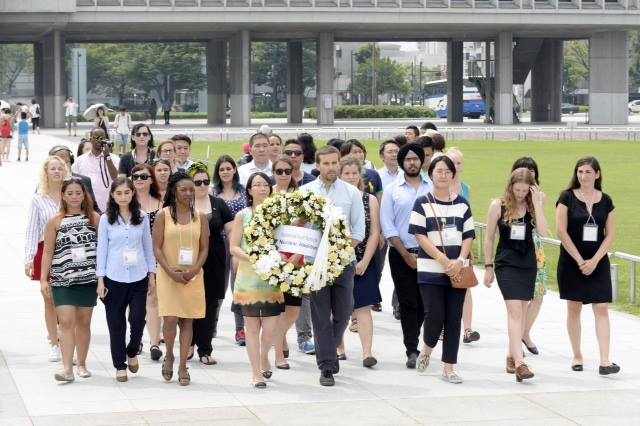 A group of 30 young people from 23 countries met in Hiroshima in August 2015 to work together for the abolition of nuclear weapons.

In August, 2015, thirty youth leaders from twenty-three countries met in Hiroshima in the hopes of strengthening solidarity and making a breakthrough toward ridding the world of nuclear weapons. We held the International Youth Summit for Nuclear Abolition over three days which culminated in a Youth Pledge, and a year-long action plan to collaborate to abolish nukes. Since then, we’ve continued to collaborate under the banner of ‘Amplify: Generation of Change’, and have taken many actions globally, toward our cause.

When we initially heard that President Obama would become the first sitting US President to visit Hiroshima, we hoped that it would signify a change or at least be a reflective experience. That it was. But the American President left out the most important part– he failed to offer any concrete plan to reduce the US nuclear arsenal, which is the largest in the world.

Like President Obama, about 9 months ago, we visited the Hiroshima Peace Memorial Park and like many before us, laid a wreath in remembrance. Like President Obama, we had the chance to meet with resilient Hibakusha (a-bomb survivors) who have dedicated the rest of their days to world peace.

Unlike President Obama, we do not have the authority to announce a dramatic reduction in the nuclear weapons or a u-turn on the United States’ plan to invest over $1 trillion in “modernizing” its nuclear arsenal over the next three decades. If we could, we would, without a doubt, because we believe that actions speak louder than words on nuclear policy and securing a peaceful tomorrow.

In the last year, we, youth activists from around the world, have witnessed first-hand the failure of international players, including the United States, to fulfill their existing nuclear disarmament obligations, despite existing mandates by international law. Many of us who were part of the International Youth Summit to Abolish Nuclear Weapons have participated directly in and around global efforts like the Nuclear Non-Proliferation Treaty Review Conference, the First Committee meetings on Disarmament and International Security, the Marshall Islands International Court of Justice cases, and the Open Ended Working Group on Nuclear Disarmament, where the U.S. leaders clearly and repeatedly demonstrated a lack of willingness to move forward in nuclear disarmament discussions.

Today, in Hiroshima, the President said: “[A]mong those nations like my own that hold nuclear stockpiles, we must have the courage to escape the logic of fear and pursue a world without them… We can chart a course that leads to the destruction of these stockpiles.”

But among the many important points and references he made, President Obama did not lay out any plan or proposal for disarmament. Why not?

If one thing isn’t obvious in today’s global climate, let us be perfectly blunt: young people are beyond tired of empty promises and nice words without the action or political will to back them up. If President Obama wants to make his final months meaningful, he must immediately and unilaterally take steps to reduce the US’s nuclear arsenal, which threatens all life on earth, while encouraging other nuclear powers to do the same. Without concrete signs of progress on nuclear abolition, the President’s trip to Hiroshima seems like mere political theater, like we have seen many times before, by many different world leaders. We simply don’t have the patience for lip service or macabre legacy tour.

We are glad that President Obama took our call to attend Peace Memorial Park, to meet with Hibakusha, and to recognize the atrocities of the past and the suffering of victims. Unfortunately, he failed to take action on what should have been the most important part of his visit and speech; to declare concrete and measurable steps that would guarantee a future where impending nuclear winter is no longer a threat. Calling for nuclear disarmament while planning to spend $1TRILLION on “upgrading” the US nuclear arsenal over the next thirty years is hypocritical and extends the danger that nuclear warheads already pose, to future generations.

Today, the President acknowledged the horrors caused by the US-Atomic-bombings of Hiroshima and Nagasaki and the learning that has come from it. But that is not enough. We will not take his calls seriously until we see that the US is working earnestly to ensure that these tragedies can never happen again. Younger and future generations are the biggest stakeholders in nuclear abolition will not stand by and allow President Obama’s visit to Hiroshima to be another missed opportunity, where lofty language casts a tall shadow of cynicism over the truth on the ground.