This article was originally published by the Deccan Chronicle. 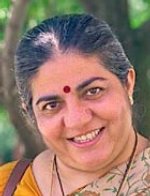 Fukushima has raised, once again, the perennial questions about human fallibility and human frailty, about human hubris and man’s arrogance in thinking he can control nature. The earthquakes, the tsunami, the meltdown at Japan’s nuclear power plant are nature’s reminders of her power.

The scientific and industrial revolution was based on the idea that nature is dead, and the earth inert matter. The tragedy in Japan is a wakeup call from Mother Nature — an alarm to tell us she is alive and powerful, and that humans are powerless in her path. The ruined harbours, villages and towns, the ships, aeroplanes and cars tossed away by the angry waves as if they were tiny toys are reminders that should correct the assumption that man can dominate over nature — with technology, tools and industrial infrastructure.

The Fukushima disaster invites us to revisit the human-nature relationship. It also raises questions about the so-called “nuclear renaissance” as an answer to the climate and energy crisis. President of the Institute for Energy and Environmental Research, Arjun Makhijani, speaking at Public Interest Environmental Law Conference, said that “nuclear renaissance” would need 300 reactors every week and two-three uranium enrichment plants every year. The spent fuel would contain 90,000 bombs of plutonium per year if separated. Water required would be 10-20 million litres per day.

Following the Fukushima disaster, China, Germany, Switzerland, Israel, Malaysia, Thailand and the Philippines are reviewing their nuclear power programmes. As Alexander Glaser, assistant professor in the department of mechanical and aerospace engineering at Princeton University, observes, “It will take time to grasp the full impact of the unimaginable human tragedy unfolding after the earthquake and tsunami in Japan, but it is already clear that the proposition of a global nuclear renaissance ended on that day”.

In the light of expected surge in orders following the France-India agreement, Areva started to hire 1,000 people a month.

Jaitapur is a seismically sensitive area and is prone to earthquakes. Yet, there is no plan for the disposal of 300 tonnes of nuclear waste that the plant will generate each year. The plant will require about 968 hectares of fertile agricultural land spread over five villages that the government claims is “barren”.

Jaitapur is one of many nuclear power plants proposed on a thin strip of fertile coast land of Raigad, Ratnagiri and Sindhudurg districts — the estimated combined power generation will be 33,000 MW. This is the region that the Government of India wanted to be declared a world heritage site under the Man and Biosphere programme of Unesco. Villagers of the Konkan region have been protesting against the nuclear plant. They have formed Konkan Bachao Samiti and Janahit Seva Samiti and have refused to accept cheques for the forced land acquisition. Ten gram panchayats have resigned to protest the violation of the 73rd Amendment.

Jaitapur has been put under prohibitory orders and more than five people cannot gather. On April 18, 2011, policemen fired at protesters who were demonstrating against the proposed Nuclear Power Park at Jaitapur. One died and eight others were seriously injured. The 2,800 MW nuclear plant planned at Fatehbad, Haryana, involves the acquisition of 1,503 acre of fertile farmland. Eighty villages are protesting; two farmers have died during protests.

A nuclear power plant is planned in Chutkah, Madhya Pradesh, where 162 villages were earlier displaced by the Bargi dam. Forty-four villages are resisting the nuclear power plant. Dr Surender Gadakar, a physicist and anti-nuclear activist, describes nuclear power as a technology for boiling water that produces large quantities of poisons that need to be isolated from the environment for long durations of time. Plutonium, produced as nuclear waste, has a half life of 240,000 years, while the average life of nuclear reactors is 21 years. There is so far no proven safe system for nuclear waste disposal. Spent nuclear fuel has to be constantly cooled, and when cooling systems fail, we have a nuclear disaster. This is what happened at nuclear reactor 4 at Fukushima.

The focus on fossil fuels, CO2 emissions and climate change suddenly allowed nuclear energy to be offered as “clean” and “safe”. But as a technology, nuclear power consumes more energy than it generates if the energy for cooling spent fuel for thousands of years is taken into account. In India, the costs of nuclear energy become even higher because nuclear power plants must grab land and displace people. The Narora nuclear plant in Uttar Pradesh, which is a mere 125 km from Delhi, displaced five villages. In 1993, there was a major fire and near meltdown in Narora.

The highest cost of nuclear energy in India is the destruction of democracy and constitutional rights. Nuclear power must undermine democracy. We witnessed this during the process of signing the US-India Nuclear Agreement. We witnessed it in the “cash for votes” scandal during the no-confidence motion in Parliament. And we witness it wherever a new nuclear power plant is planned. Physicist Sowmya Dutta reminds us that the world has potential for 17 terra watt nuclear energy, 700 terra watt wind energy and 86,000 terra watt of solar energy. Alternatives to nuclear energy are thousand times more abundant and million times less risky. To push nuclear plants after Fukushima is pure insanity.