Next Steps from Discourse to Action by Richard Falk

This is the transcript of a talk given by Richard Falk at the Nuclear Age Peace Foundation’s symposium “The Fierce Urgency of Nuclear Zero: Changing the Discourse” on October 25, 2016. The audio of this talk is available here. For more information about the symposium, click here. 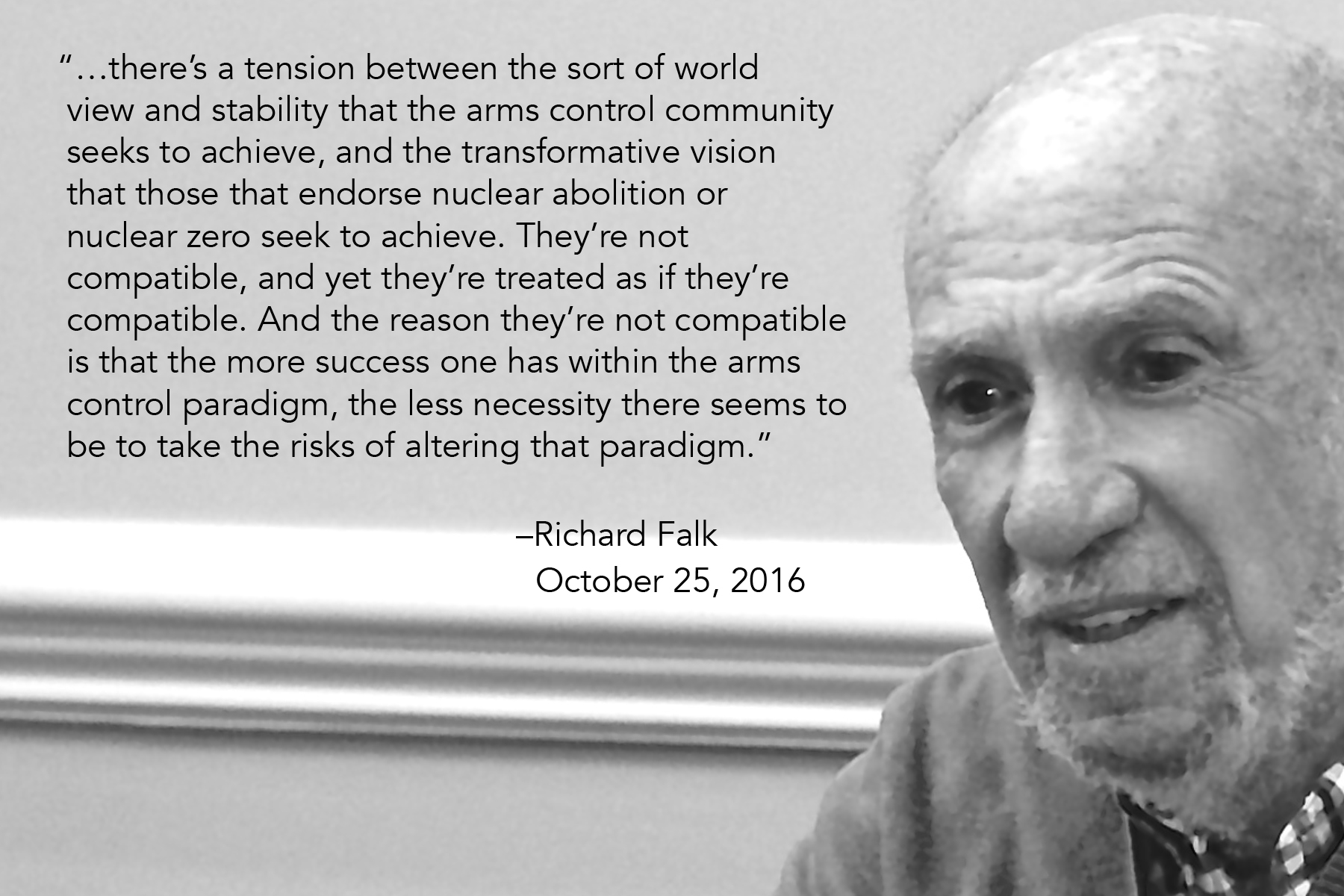 Well, let me begin by saying how grateful I am to David, Rob and Rick, in particular, for bringing us together for this really very exceptional set of discussions. I think it’s been invaluable. Not so much I think that it led us to understand the issues differently, but I think it attuned us to the general challenges that are embedded in this effort to move from discourse to action, and to diagnose what the disease is. There’s a Burmese slogan, “Disease unknown, cure unknown.” And I think it’s essential in framing hope in a way that doesn’t lead to false hopes, that we are explicit about how to diagnose what it is we’re trying to overcome. And in that sense, we need to understand what sorts of action, what sorts of initiatives can be useful within the historical circumstance that we’re in. And there’s no question that it’s as dangerous as anything that has existed, certainly since the end of the Cold War. If you doubt that, you might read the current issue of The Economist, which has the cover story on Putinism, and has a long leader editorial in which it depicts the risks of a nuclear confrontation, but puts all the onus of the blame for creating this situation on Russia. There’s no self-scrutiny in terms of the West and the provocative deployments and other kinds of initiatives that it’s taken. But it is a very, I think, vivid indicator that this very influential journal would highlight the nuclear dangers at this moment in time.

I think that there’s no question that in order to be effective in a political context, there has to be a grounding of hope, that one has to hope that valuable initiatives are both practical and lead toward the goals that we seek to attain. I’m sometimes disturbed by the discourse of hope, because I think it looks too facilely at what seems to be acceptable within the Beltway, or to governmental sources at the moment, what one can do. And I feel we, especially if we’re trying to change the discourse among the citizenry, among the young, within the media, that we have to start from a very strong ethical repudiation of any link between security and nuclear weapons. I think it’s not a rational issue. As long as you keep it on a rational plane of being dangerous or imprudent, there are always counter-arguments.

In other words, on the plane of rationality, you may persuade yourself and your friends, but it won’t have an impact on the consensus that I think has persisted ever since nuclear weapons were developed, that the best one can hope for is an effective non-proliferation regime reinforced by trying to avoid vulnerability to accidents, miscalculations and the like. In other words, prudent nuclearism has been the prevailing consensus, not only on the part of the US, but on the part of all the nuclear governments. And I feel that unless we clearly repudiate that consensus, we will not create the foundation for a genuine movement to eliminate nuclear weapons. So what I’m really trying to express is the ethical imperative that really should lead to self-scrutiny about the fact that we’ve been threatening the annihilation of tens of millions of people for decades. You know, it’s the point that E. P. Thompson made a long time ago, about a culture of exterminism, that you don’t have to use the weapons, you don’t have to threaten them, but even to base your security on the idea that you might use them is so deeply immoral and incompatible with the values of a civilized society, that it seems to me one important contribution would be to acknowledge that ethical imperative.

I’ve also tried to stress my feeling that unless arms control measures, these sort of step-by-step approach, or incremental approach, or risk-reduction approach, that that’s, as Rob, I think, pointed out very well, we’ve been waiting 47 years for Article VI of the Non-Proliferation Treaty to be implemented, and despite the unanimous call by the International Court of Justice in its 1996 opinion, it completely, there’s a Teflon effect. There’s no, we are no nearer that goal. And what has happened is that you have two types of non-proliferation regimes. You have the explicit Treaty, which contains Article VI, and the withdrawal clause in Article X, and then you have the geopolitical regime that excludes those Articles.

Iran has no option to withdraw from the Nuclear Proliferation Treaty without facing the prospect of aggressive war against it, and it certainly can’t invoke the Article X, which gives states the option to withdraw if they feel their security is threatened. And Iran and North Korea both have extremely good deterrence arguments in support of acquiring nuclear weapons. So it seems to me very important that while seeking a prudent posture toward the risks that presently exist, that they be contextualized in a, by reference both to the ethical imperative and to the need to transform our understanding of stability and security. And so that, where do you go with that, and it seems to me it provides the foundation for relevant pedagogy, for educating the kinds of audiences that we need to mobilize if we’re really to challenge the kind of prudent nuclearism that has prevailed for so long.

And I feel, finally, that it’s important not to succumb to the liberal ideology, which Judith alluded to in her presentation, about the good being the enemy of the best. What I feel here, is that the, if you call arms control the good, it’s the friend of the unacceptable, because it stabilizes what should be repudiated. And therefore, it’s not the path, it’s a very difficult challenge, because you obviously don’t want to act imprudently, and so you want to encourage prudence. But at the same time it’s a Faustian bargain. If the prudence is achieved at the cost of stabilizing nuclearism, and that’s what’s happened, in my view, over the whole period where nuclear weapons have existed.

Richard Barnett wrote a book in the 1960s called ‘Who Wants Disarmament’, it was a time when both the US and the Soviet Union were putting forth proposals that seemed to indicate a commitment to a general and complete disarmament but preceded by total nuclear disarmament. And he shows in that book very clearly that that wasn’t the real policy, the stated policy was not the real policy of either side, and that this was a kind of peace propaganda, which disguised the deeper engagement with what I’ve been calling ‘prudent nuclearism’, that that was the real policy. And part of prudent nuclearism is as rigorous a non-proliferation regime as is geopolitically possible, that combination of events.

So, let me end by trying to say that I think that we need to see whether there is a consensus on these ideas. In our drafting group discussions, there’s been a certain tension between saying, “Let’s focus on what seems feasible and necessary in the present context without raising these underlying issues,” and the view that I’m associated with or express that says, “Unless you raise the underlying issues you will get more of the same.”