New CEO on a New Path to Peace 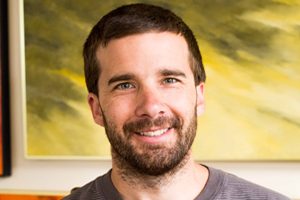 Wayman, 40, will now focus the work of NAPF on a new initiative called Peace Literacy (peaceliteracy.org), an educational framework that teaches people the skills needed to proactively understand, confront, and heal the root causes of the most critical issues of our time. Through workshops with students, teachers, community leaders, clergy, and policymakers throughout the world, Peace Literacy provides people with the tools they need to become as well-trained in waging peace as soldiers are in waging war.

Having served as Director of Programs and Operations at NAPF, and more recently as Deputy Director, Wayman has driven NAPF’s work as a Partner Organization of the International Campaign to Abolish Nuclear Weapons, which collectively received the 2017 Nobel Peace Prize for achieving the UN Treaty on the Prohibition of Nuclear Weapons. He has a Bachelor’s degree in International Business from Marquette University, and a Master’s in Non-Profit Management and Political Advocacy from the School for International Training. His writings on sustainable policies and nuclear disarmament have been published by the New York Times, the Los Angeles Times, and the Washington Post. Wayman succeeds David Krieger, NAPF’s long-serving and influential President Emeritus.

Working alongside Wayman is Paul K. Chappell, NAPF’s Peace Literacy Director. Chappell is an international peace educator who graduated from West Point in June 2002 and was deployed to Kuwait and Iraq. After leaving the military as a Captain in 2009, Chappell attended civil rights leader James Lawson’s Non-Violence Program in 2010. He also attended the Level 1 and 2 International Nonviolence Summer Institute in 2013 where he trained with civil rights leaders Bernard Lafayette and C.T. Vivian, both of whom worked closely with Martin Luther King, Jr.

NAPF, a non-profit headquartered in Santa Barbara, opened its doors in 1982 and, for nearly 40 years, has worked to build a more peaceful world, free of nuclear weapons. Today, the staff is energized and committed to providing solutions for what many have deemed “the new abnormal” – a world in which truth is indistinguishable from fiction and the misuse of new technologies threatens the very fabric of our society.

Wayman commented, “In order to achieve a world in which nuclear weapons can be abolished and stay abolished, we must act to heal the root causes that have led humans to create the means for our own annihilation. Peace Literacy is doing just that by providing tailored curricula from pre-school to adult education, and every level in between.”

Wayman went on to say, “It is an honor to have the confidence of the NAPF Board of Directors, our dedicated donors from around the world, and our 80,000-plus members to lead this great organization into a new decade. There couldn’t be a more important time in history to empower people with the knowledge and skills to achieve peace in their own lives, in their communities, and around the world.”

A hi-res photo of Wayman can be found at http://bit.ly/wayman-photo

The Nuclear Age Peace Foundation’s mission is to educate and train people of all ages and backgrounds to solve the most dangerous technological, social, and psychological issues of our time, and to survive and thrive in the 21st century. The Nuclear Age Peace Foundation is a non-partisan, non-profit organization with consultative status to the United Nations. For more information, visit wagingpeace.org.