Sadako Sasaki was a two-year-old child when the atomic bomb was dropped on Hiroshima.  She died of radiation exposure from the bomb ten years later, when she was twelve years old. In her hospital bed she folded paper cranes in the hope of regaining her health. Japanese legend says it is good fortune to fold 1,000 paper cranes.  On one of the paper cranes she folded, Sadako wrote, “I will write peace on your wings, and you will fly all over the world.” 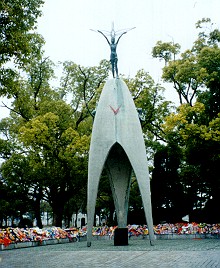 Sadako died with 644 cranes folded.  Her classmates finished the job.  Today there is a statue of Sadako in Hiroshima Peace Memorial Park.  Children from all over the world send colorful paper cranes to adorn this statue and other monuments in Hiroshima and Nagasaki, and Sadako’s story has inspired young (and older) people all over the world to work for peace and a world free of nuclear weapons.

Sadako’s paper cranes have flown to Santa Barbara, where we have created a Sadako Peace Garden, and hold an annual ceremony to remember the innocent victims of war.  Surely Sadako’s cranes have flown all over the world and are present wherever people gather to remember the innocent victims of war, including those who died as a result of the atomic bombings of Hiroshima and Nagasaki.

We remember the past to learn from it so as to not repeat its mistakes.  The only way we can be sure we will not destroy ourselves with nuclear weapons is to eliminate them all.  It is what the nine nuclear-armed countries are obligated to do, and what they must begin now by means of negotiations in good faith for the phased, verifiable, irreversible and transparent elimination of these weapons.  Sixty-nine years of the Nuclear Age is long enough.  It must be ended.

Let us honor Sadako, as well as the survivors of Hiroshima and Nagasaki and the victims of nuclear testing, by demanding an end to the modernization and possession of nuclear arms.  Humanity is endangered.  The human future is at risk.  Enough is enough.  We must demand of our leaders that they undertake negotiations in good faith to abolish nuclear weapons if we are to assure that these steel-hearted annihilators will not abolish us.

When we have achieved the goal of a world free of nuclear weapons, let us set our sights on a world without war and violence and one that is equitable for all and in which human dignity is universally respected and upheld.