My Meeting with Pope Francis

On November 10, 2017, I had the honor of meeting Pope Francis at the Vatican as part of the conference “Perspectives for a World Free of Nuclear Weapons and for Integral Disarmament.” The two-day conference was put on by the Vatican’s Dicastery for Promoting Integral Human Development. 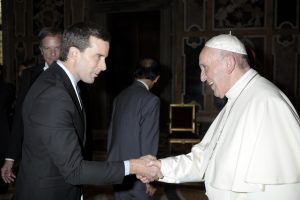 The absolute personal highlight was the opportunity to meet Pope Francis and exchange greetings with him. You can probably see his kindness and joy shining through in this picture, and it is even stronger in person. Pope Francis is obviously a very busy person, but he takes this issue extremely seriously. He took the time to meet each of us individually, to shake our hands and greet us. This is not an easy task, but he did it with great joy.

He started by delivering a 10-minute address to our group. Speaking about the catastrophic humanitarian and environmental effects of nuclear weapons, he said, “The threat of their use, as well as their very possession, is to be firmly condemned.”

The threat of use of nuclear weapons is to be firmly condemned. Nuclear deterrence – the idea that our overwhelming ability to destroy an adversary with nuclear weapons will deter them from attacking us or what we call our vital interests – has at its core the threat to use nuclear weapons.

The very possession of nuclear weapons is to be firmly condemned. Nine countries (the U.S., Russia, UK, France, China, Israel, India, Pakistan, and North Korea) together possess around 15,000 nuclear weapons. The U.S. and Russia together possess about 90% of these. In the U.S. alone, our country is in the beginning of a 30-year plan to spend at least $1.25 trillion on new nuclear weapons, delivery systems, and production infrastructure. This is about $80,000 per minute – every minute, for 30 years – on nuclear weapons. Pope Francis also criticized this outrageous spending, saying, “As a result, the real priorities facing our human family, such as the fight against poverty, the promotion of peace, the undertaking of educational, ecological and healthcare projects, and the development of human rights, are relegated to second place.”

So, the threat of use and the possession of nuclear weapons are firmly condemned. They are morally unacceptable.

These are big questions in light of Pope Francis’s shift in Catholic teaching from a conditional moral acceptance of nuclear deterrence to an outright declaration of nuclear weapons’ immorality.

A key challenge moving forward is how to get the important and revolutionary new teachings from Pope Francis off of paper and into the pews on Sunday.

In his presentation to the conference, Fr. Drew Christiansen of Georgetown University said that Catholic moral theologians who are also just-war analysts have the responsibility with respect to global moral problems like climate change and nuclear abolition to make the Church’s teaching “church-wide and parish deep.”

Even for non-Catholics, I believe that Pope Francis’s moral guidance is significant and represents a major shift in power towards those of us who believe that human survival is dependent on peace and the abolition of nuclear weapons.