I am very happy to be here with the Marshallese victims in the 60th anniversary of the Bravo shot. I thank you very much for giving me this opportunity to speak before you.

My name is Matashichi Oishi, former crewmember of the Japanese fishing boat, Fifth Lucky Dragon. Sixty years ago, we were catching tuna at about 160 kilometers to the east of Bikini Atoll, Marshall Islands. 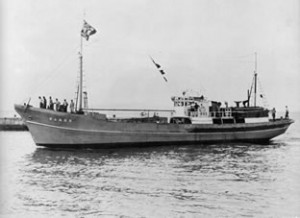 On the morning of March 1, 1954, the U.S. military conducted a hydrogen bomb test at Bikini Atoll. The destructive power of the bomb was enormous. It is said to be 1,000 times greater than the atomic bomb dropped on Hiroshima. Not only our boat but about 1,000 Japanese fishing boats were exposed to the deadly fallout from the bomb. After the explosion with brilliant flash, frightening sound and a red fire ball going up to the sky, massive white powder fell on us. Our heads and bodies were covered with it. The white powder was not hot. Nor it had any smell or taste, so we did not feel any danger at that time. But around the evening of that day, all crewmembers fell sick, having headache, dizziness, nausea or diarrhea. Some of them were ill in bed.

It was only after some time that we learned the white powder contained strong radiation. We had no knowledge about radiation at that time. The white powder stuck on our heads or got into our underwear. As it accumulated on the boat, footsteps were marked on the deck after we walked on it. After a couple of days, blisters developed on our skin. It was actually the burns caused by radiation. After a period of one week to 10 days, our hair began to come off. Such strange symptoms appeared one after another on our bodies. We talked each other on the boat, “Let us not talk about this even after going home. If it is known to the United States, something terrible will happen. We may be used as guinea pigs for scientific tests.”

Due to the exposure to the fallout, 16 out of 23 crewmembers have died in the prime of life in their 40s or 50s. My first child was deformed and stillborn. I have suffered from liver cancer and had an operation. At present, I am suffering from bronchitis, irregular heartbeat, diabetes, high blood pressure, atrial fibrillation and lung tumor. Two years ago, I had brain hemorrhage, which left paralysis on the right side of my body. Now I have lost the sense of smell and am barely surviving, taking more than 20 kinds of medicine. Many fishermen who encountered the H-bomb test have died without knowing that they were internally irradiated.

The government of Japan, rather than claiming compensation for the enormous damage suffered by the fishing communities or fishermen, received only a meager amount of consolation payment from the US. In return, behind the scenes, Japan made deals with the U.S. government to receive the provision of its nuclear technology and nuclear reactors. That was the start of nuclear power generation in Japan.

Since around 1985, I have spoken before junior and senior high school students more than 700 times to make them known about the danger of radiation and internal exposure.

Internal exposure, though invisible, is life-threatening and dangerous. This danger still persists in Rongelap and the Marshall Islands. A report of the US National Cancer Institute has estimated that more and more Marshallese people will develop cancers. In addition to fallout from nuclear testing which covered the earth, nuclear plant accidents took place in Three Mile Islands, Chernobyl and Fukushima, inflicting severe damage and contamination on local people and the world over. When I see an increase of cancer patients, I suspect that radiation effects may be one of the causes of this situation.

It was reported that the total amount of radiation released into the ocean since the accident of the Fukushima Daiichi nuclear power plant amounts to 27,000 trillion Bq as of September last year. I hear that even now, 400 tons of contaminated groundwater is flowing into the ocean. The Bikini test contaminated the ocean, and the same thing is happening now. As a former fisherman, I am concerned about radiation effects on the marine life near Japan and in the Pacific. Both the Marshall Islands and Japan are ocean nations. We must keep our ocean clean and safe.

Ten years ago, together with John Anjain, late Rongelap mayor, I visited his home island Rongelap. John told me a lot about the old days on the island. I especially remember the story about his son, Lekoj. I felt his deep sorrow as a father to lose a 19-year-old son, who used to be as strong and happy as anyone else. Sadly, his death was followed by many more deaths and sufferings. The United States should reveal all the facts on the damage and effects of nuclear testing and take responsibility for them. I will continue to call on the US to fulfill its responsibility to the end. Just one month and a half since that time, I was informed of his death. He died of cancer. My heart broke at the news.

Many of the people in the Marshall Islands greatly suffered from nuclear arms race, which was carried on for producing powerful weapons to fight. I call on the leaders of nuclear weapon states to reflect on their folly. Give justice to the victims. Those responsible for nuclear damage must make compensation to them. I firmly oppose both nuclear weapons and nuclear power.