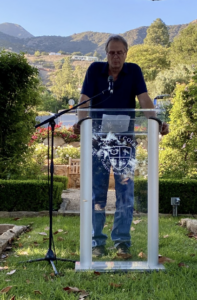 A Good Year for Peace
by David Starkey

You will think I am being ironic,
toying with your sense of balance,
like a prankster pulling too hard
on one rope of a swing,
but, no, listen. Is not the jackass
in face paint and Viking horns
lodged like a wad of gum in a Virginia jail?
His cronies—not enough, but some—
they, too, stew in their holding cells,
quieted like the air after heavy rain.
Even the timid Vice-President
stood his ground in the name
of order, clutching the remnants of law
to his chest like a sash of merit badges.
And the bulbous buffoon,
though he lurks like a cartoon villain
in his Mar-a-Lago lair,
is momentarily deprived
of his accustomed sting.
In his place, an aged man
who would rather give than take,
his slight stutter a token
of good will. Yes,
his priests would deny him
the right to worship, yet still he is present
every Sunday, kneeling and humble
before God, his liver-spotted hands
firmly clasped in prayer. 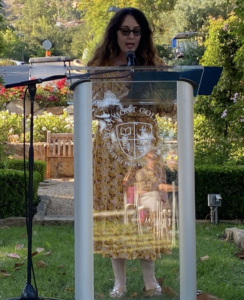 The Function of a Wing
by Emma Trelles

They will arrive as red masked druids, ghost
The edge of the abandoned golf course, sandhill
Cranes poised between the tall grass and oaks lathered
In moss, a fading, this pocket of homes long past
Afternoons of stickball and running along paths,
Hearts alert to the pulse of clouds shining
Despite how loneliness drifts beside us all.
Each day’s arc is a wing, a wish hurling
Across the sky, and also time, because what is the clock
But a ship of travel we must board upon our first breath?
I have read about a girl who pinned her healing to the making
Of cranes, and how they navigate by starlight, instinct, the ancient
Maps scored inside the lace of their bones. They know how to dance.
They arrive as themselves. A newborn will curl around her mother’s temples
In peace, a place where no harm will descend in its terrible light, its cell-stripping forms,
A place of quiet, and journey that is a kind of returning to love. 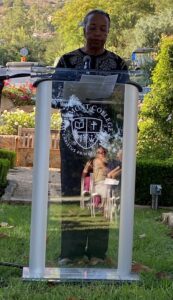 This is the map of our body
that which contains us –
What seems naked deceives usindivisible hues sheathed in rugged cloth.
We know what lies beneath.
It keeps coming back to this:
even as boys die where they fall;
their blue bodies decomposing
on concrete facades
and girls striding forth in pubescent bravado
bleed from wounds inflicted by unguarded forces
those who deign constrict their tongues

Even as a bright mosaic of children,
shades of pink  beige and brown,
suckle at the fountain of knowing
their waning innocence
draws fire from a reckless discontent
their precious hearts skipping beats
like stick figures dancing on hard ground
their open mouths choked with muted sound
their last breaths shrouded in grotesque horror

Our mourning cries but a hollow echo
Our inconsolable grief a muffled scream.
Where beyond the horizon might hope live?

We know women of all allegiances
who lay battered on the threshold of safe places;
their sacred vows dishonored and heaved asunder.
Yet like iridescent smoke from a sacrificial pyre
their wounded spirits still rise.
Swirling in the manner of a zephyr,
Cradling grace for generations to come.

We know men who never stand to battle;
who never declare their brother a foe.
Men who worship life as treasure;
who never prize their purpled hearts.
Men who weep bold tears when others die.
Men who gently tend memorial gardens .

On some far hill, a dim golden beam is reflected
In some sequestered place,
a flickering light maintains
and there, men of all stations
women of all creeds
descendants of all ancestry
life after life hold fast to an eternal vision.
The mingled colors
the vibrancy of our universe
the vein of our existence
the map of our one body
the container of us all.