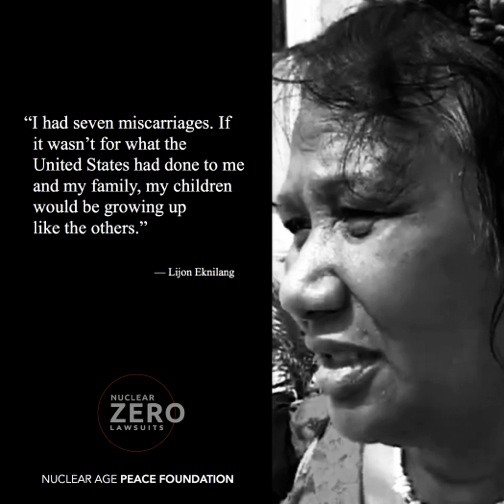 Lijon Eknilang was just a little girl at the time of the Bravo nuclear test on March 1, 1954. She remembered the snowstorm-like covering of radioactive fallout that plagued Rongelap following the blast. Like so many of her neighbors, Lijon faced long-term health problems following the blast. For Lijon, those terrible health problems came in the form of seven miscarriages, and the inability to have children.

Lijon’s suffering motivated her to pursue anti-nuclear activism, which brought her to the United States and Europe to draw attention to the health problems experienced by the people of Rongelap. Often referred to as the ‘icon of the Marshall Islands,’ Lijon’s international advocacy for the nuclear test victims at Rongelap has been instrumental in exposing the tragedies that occurred there. Lijon spoke on behalf of the Rongelapese nuclear test victims before the United States Congress and the Advisory Proceedings on the Legality of the Threat or Use of Nuclear Weapons at the International Court of Justice. She exposed the health problems and gruesome birth defects faced by the Rongelapese women, and in doing so become known for her accounts of ‘jellyfish babies’, which she described as children born with no muscles or bones.

Lijon Eknilang continued her advocacy throughout her life, participating in many discussions and panels, and submitting her personal accounts to publications such as the Seattle Journal for Social Justice. In August, 2012, Lijon passed away on the island of Majuro. She was 82.