The Fierce Urgency of Nuclear Zero: Changing the Discourse – A Symposium Overview

THE FIERCE URGENCY OF NUCLEAR ZERO: CHANGING THE DISCOURSE
A SYMPOSIUM OVERVIEW
By David Krieger 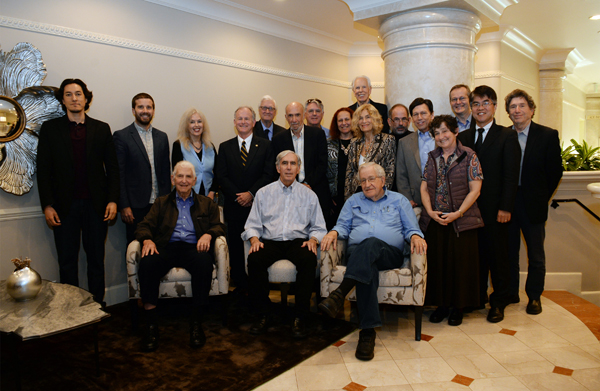 The Nuclear Age Peace Foundation (NAPF) hosted a symposium on October 24-25, 2016 on “The Fierce Urgency of Nuclear Zero: Changing the Discourse.”  The symposium participants, long-time experts on nuclear dangers, included Noam Chomsky, Daniel Ellsberg and Richard Falk.  For a complete list of participants, click here.   Participants voiced concerns that nuclear dangers are increasing in many parts of the world, including Europe, the Middle East, South Asia and Northeast Asia.  Particular concern was expressed over the deterioration in US-Russian relations.  Speakers stressed that a war between the U.S. and Russia is possible, even likely, under current conditions; that such a war could escalate to nuclear exchanges; and could, in that case, trigger a Nuclear Famine or a Nuclear Winter and be a war to end civilization and even cause the extinction of the human species and many other forms of life on the planet.  These concerns are not meant to be alarmist, but they are meant to sound an alarm.

There was general agreement that nuclear war poses an existential threat to humankind and that the warning sirens are now sounding.  There is hope that such a war can be avoided, but that hope, while necessary, is not sufficient to end the nuclear threat now facing humanity and complex life on the planet.  Hope must be joined with action to end the nuclear weapons era in order to abolish nuclear weapons before they abolish us.  And the action must be preventive in nature since there is virtually no possibility of recovery from a nuclear war.  In fact, if one side only were to launch its nuclear arsenal at the other and there were no retaliatory response, the likelihood is that the initial attack would be sufficient to destroy not only the opponent but the attacking side as well.  Thus, Mutual Assured Destruction (MAD) must not be reconsidered in light of Self-Assured Destruction (SAD), even for the attacking side.

The U.S. and Russia must step back from the confrontations in which they have been engaged in Europe, Ukraine, Syria, the Middle East and elsewhere.  The discourse must be shifted from confrontation and military might to finding common ground through diplomacy to step back from the brink.  This is the only sensible way forward.  As many leaders, including Ronald Reagan and Mikhail Gorbachev, have long realized and stated, “A nuclear war cannot be won and must never be fought.”

Citizens of the two countries, as well as leaders, have a role to play in assuring their common future.  It is time for citizens to enter the discourse in their own interests and those of their families and communities.  We have come too far to sacrifice the future on the dangerous shoals of nationalism, militarism and nuclearism.   As Einstein warned early in the Nuclear Age, “The unleashed power of the atom has changed everything save our modes of thinking, and thus we drift toward unparalleled catastrophe.”  We must change our modes of thinking, our discourse and our actions if we are to prevent a catastrophic nuclear war, one that could be initiated by malice or mistake, by anger or accident.

Youth and the Media Must Take the Lead

There was discussion that two groups in particular could lead the way toward ending the nuclear era: the media because of their power and influential outreach, and youth because of their larger stake in the human future.

The media needs to get and convey the message that nuclear weapons pose far too great a risk to the human future, and nuclear war would be a catastrophe beyond our ability to imagine.  The media must awaken to the existential dangers of nuclear war and help to awaken people throughout the world to these dangers.  Just as the media has helped to propel a widespread understanding of the existential dangers of climate change, it must do the same for nuclear dangers through documentaries, feature films, news and analysis, fiction, and the use of various forms of social media.

How to break through the ignorance and apathy of young people regarding nuclear dangers was recognized as a significant challenge.  It was noted that documentaries, like “The Untold History of the United States,” seem to hold promise for reaching this audience and that more of this educational work needs to be done.  The Bulletin of the Atomic Scientists “Voices of Tomorrow” program, which involves young writers in the Bulletin’s web content, also offers hope for the next generation’s involvement.  And capturing the attention of the Bernie Sanders movement could also offer a way to mobilize young people around the need for nuclear weapons abolition.  Further, it would be valuable to expand the use of NAPF’s Peace Literacy Program in schools, places of worship and social organizations such as Rotary International.

The Wisdom of Russell and Einstein

The symposium concluded with reference to a key paragraph from one of the most important documents of the 20th century, the Russell-Einstein Manifesto: “There lies before us, if we choose, continual progress in happiness, knowledge and wisdom.  Shall we instead choose death, because we cannot forget our quarrels?  We appeal as human beings to human beings: Remember your humanity and forget the rest.  If you can do so, the way lies open to a new Paradise; if you cannot, there lies before you the risk of universal death.”

This warning is as valid today as when it was issued in 1955, but it has been largely overlooked or forgotten.  It could become the basis for a new discourse for humanity.