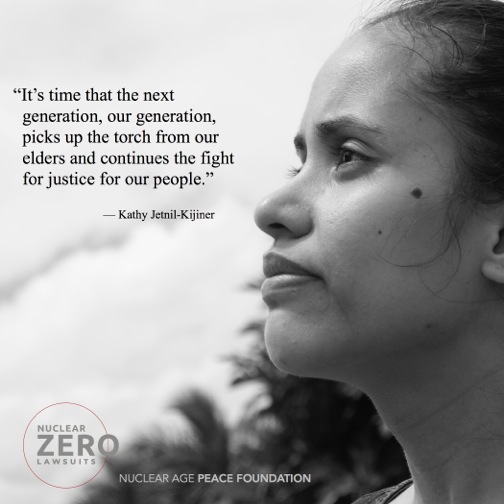 In her own words:

From 1946 to 1958, the United States conducted 67 nuclear tests in my home, the Marshall Islands. The most powerful of those tests was the “Bravo” shot, a 15 megaton device detonated on March 1, 1954, at Bikini atoll – which was 1,000 times the power of the Hiroshima bomb. Since then, the US has continued to deny responsibility while many Marshallese continue to die due to cancer and other radiation related illnesses. In my own family, both my grandparents passed away before I was born due to cancer and just two years ago I lost my ten year old niece Bianca to leukemia. Radiation related illnesses endure into today, and many more of our family members continue to battle with the effects of those tests which took place over 50 years ago.

We Marshallese grow up with this history and these stories. We know them all too well. Not just stories of cancer, but also stories of babies born with no limbs, of stillbirths and thyroid problems, of families starving on outer atolls after being displaced from their own homes, stories of ash that fell from the sky that looked like snow. And then there are the stories of the land we lost – the beautiful bountiful Bikini atoll, how the elders cried as they were ripped from the shores of their ancestors.

The hardships which the “nuclear nomads” of the four atolls – Bikini, Rongelap, Enewetak and Utrik – have had to face is all the more horrific when you take into account how strongly our culture is tied to our islands, how peaceful we have been as a people, and how vulnerable we were to the US. As our land and our food became contaminated, we were forced into an increased dependence on imported, canned foods, a major change in our diet and lifestyle – which has contributed to a modern day epidemic of diabetes. It also meant that our people were no longer able to maintain certain cultural traditions, skills and knowledge that depended on close ties to our land. Despite all of these trials, however, our people have survived. And we continue to resist.

I am proud to say I come from a line of activists who have for many years fought against these atrocities. It is this history which gives us the strength that is needed to continue to remember, recommit, and resist, as we continue the struggle to bring about change for our people.