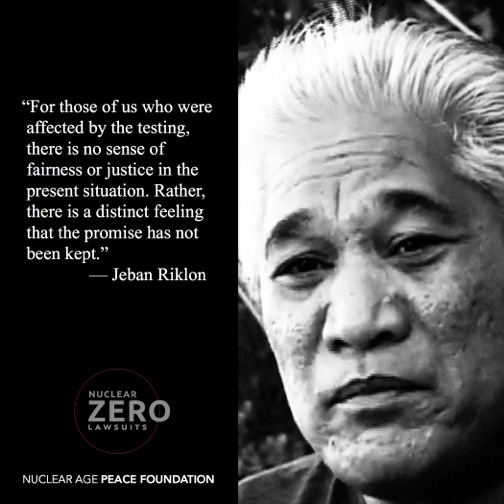 Jeban Riklon was two years old, living life on an island paradise when the Bravo nuclear test was detonated. It was an explosion that would turn out to be 1,000 times more powerful than the bomb dropped on Hiroshima.

His family and the entire community on Rongelap were relocated for three years before being allowed back to their home island. Jeban and his family were not informed, however, of the extremely contaminated state of their home upon return.

From a U.S. official report: “Even though the radioactive contamination of Rongelap Island is considered perfectly safe for human habitation, the levels of activity are higher than those found in other inhabited locations in the world. The habitation of these people on the island affords most valuable ecological radiation data on human beings.”

Riklon did not read that report until much later in his life, but while at the Second Conference on the Humanitarian Impact of Nuclear Weapons in Mexico, February 2014, Riklon alluded to it when he said,“I grew up to witness and experience the unforgettable human consequences from the fallout. When you spend your whole life seeing that much physical and emotional pain, your tears dry up and you force yourself to question intentions, justice and human value. Many of our survivors became human subjects in laboratories and almost 60 years on, we are still suffering.”

Jeban Riklon counts himself lucky to be alive today, though he suffers from permanent headaches, nausea, and muscle pain. He pays the price of the Bravo test each day of his life, while also fighting for the rights of his fellow Marshall Islanders. He demands justice for the human rights violations his people experienced and for the promise that has gone unanswered. “People, especially the younger generation, don’t understand the consequences of contamination. We who were under the fallout, we know. We experience it mentally and physically every day of our lives.”