Santa Barbara – On October 6, the 2017 Nobel Peace Prize was awarded to the International Campaign to Abolish Nuclear Weapons (ICAN) “for its work to draw attention to the catastrophic humanitarian consequences of any use of nuclear weapons and for its ground-breaking efforts to achieve a treaty-based prohibition of such weapons.” 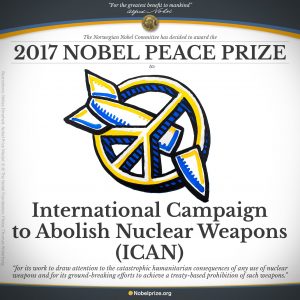 The Nuclear Age Peace Foundation (NAPF), a non-partisan, non-profit organization founded in Santa Barbara in 1982, has been an active member of ICAN since its inception a decade ago.

NAPF President David Krieger said, “This is an immense honor for the hundreds of ICAN partner organizations and campaigners around the world who have worked tirelessly for a treaty banning nuclear weapons, which was finally adopted this year. I am particularly happy for the hibakusha – survivors of the atomic bombings of Hiroshima and Nagasaki – who have dedicated their lives to the abolition of nuclear weapons.”

Rick Wayman, NAPF’s Director of Programs, took an active role in ICAN’s efforts during the negotiations of the Treaty on the Prohibition of Nuclear Weapons at the United Nations earlier this year. As part of ICAN’s diverse international team of campaigners, Rick assisted with lobbying countries to support strong language in the treaty, as well as with amplifying ICAN’s message in the media and social media.

Wayman said, “The recognition by the Nobel Committee of ICAN’s outstanding work is well-deserved. Achieving the Treaty on the Prohibition of Nuclear Weapons has been a collaborative effort that involved bold strategy, lots of hard work, and even some fun. There remains much work to be done to finally achieve the abolition of nuclear weapons, particularly in the United States, which continues to maintain thousands of nuclear warheads. I hope that this Nobel Peace Prize will awaken many more people around the world to the urgent need to work for the abolition of nuclear weapons. We can, and will, achieve this goal.”

A statement from ICAN about the award is here. More information about the Nuclear Age Peace Foundation is here.