The Nuclear Age Peace Foundation is now in its 33rd year of working for peace and a world free of nuclear weapons.  We seek these goals for the people of today, and also for those of the future, so that they may have a healthy planet to live on and enjoy.

Science and technology have brought great benefits to humanity in the form of health care, communications, transportation and many other areas of our lives.  An average person alive today lives a better and longer life than did kings and nobles of earlier times.  Yet, science and technology have not been universally positive.  They have also given us weapons capable of destroying civilization and most complex life on the planet, including that of our own species.

In the Nuclear Age, our technological capacity for destruction has outpaced our spiritual and moral capacity to control these destructive technologies.  The Foundation is a voice for those committed to exercising conscience and choosing a decent future for all humanity. 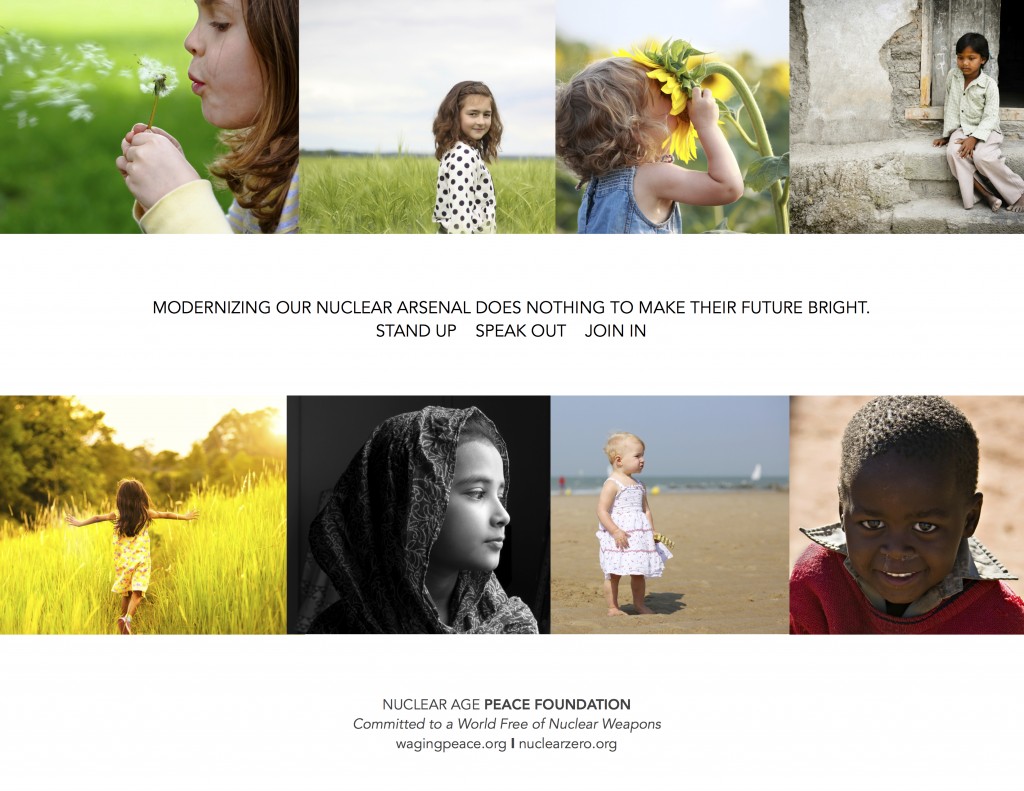 The Foundation continues in its role as consultant to the Republic of the Marshall Islands (RMI) in its courageous Nuclear Zero lawsuits against the nine nuclear-armed Goliaths.  The Marshall Islanders, who have been victims of US nuclear testing, know the pain and suffering caused by these weapons.  Their lawsuits seek not compensation, but to assure that the nuclear-armed countries fulfill their obligations under the nuclear Non-Proliferation Treaty and customary international law to negotiate in good faith to end the nuclear arms at an early date and to achieve nuclear disarmament in all its aspects.  We are proud to stand with the RMI in these lawsuits that seek an end to the nuclear weapons era.

There is no way to humanize weapons that are inhumane, immoral and illegal. These weapons must be abolished, not modernized.  And yet, all nine nuclear-armed countries are engaged in modernizing their nuclear arsenals.  The US is leading the way, planning to spend more than $1 trillion on upgrading its nuclear arsenal over the next three decades.  In doing so, it is making the world more dangerous and less secure.  The US could lead in humanizing rather than modernizing by reallocating its vast resources to feeding the hungry, sheltering the homeless, providing safe drinking water, assuring an education for the poor, as well as cleaning up the environment, shifting to renewable energy sources and repairing deteriorating infrastructure.

Join us in making the shift from modernizing nuclear arsenals to humanizing the planet.