Vienna, Austria – December 2014 –– In a remarkable show of strength and unity, the Youth Division of Soka Gakkai in Japan presented to Tony de Brum, Foreign Minister of the Marshall Islands, more than 5,000,000 signatures in support of the Nuclear Zero campaign. The presentation took place in Vienna at the Civil Society Forum sponsored by the International Campaign to Abolish Nuclear Weapons (ICAN).

The Nuclear Zero petition is part of a global campaign calling for a world free of nuclear weapons. The petition states, “To protect humanity’s future, we support the Marshall Islands, a small island nation that is courageously seeking to enforce the Nuclear Zero promise – a world free of nuclear weapons.” The petition goes on to call upon the nuclear-armed nations to fulfill their moral and legal obligations to begin negotiations for complete nuclear disarmament. To sign the petition and learn about the campaign, visit nuclearzero.org. 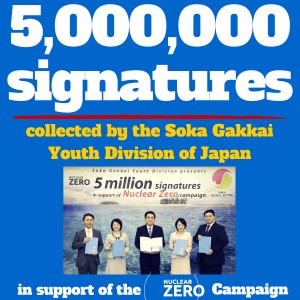 Soka Gakkai Youth in Japan is comprised mainly of young men and women in their 20s and 30s. It is an arm of Soka Gakkai International (SGI), a grassroots Buddhist association with 12 million members around the globe who promote the longstanding tradition of Buddhist humanism. Soka Gakkai Youth Leader, Taro Hashimoto, stated, “We are deeply grateful to the efforts of many youth members and their friends who have helped us gather millions of signatures endorsing the Nuclear Zero campaign…Soka Gakkai International President, Daisaku Ikeda, has repeatedly called for a world youth summit for nuclear abolition. We look forward to connecting with young people around the world committed to abolishing nuclear weapons and making sure that the voices of those who will shoulder the future will be heard by the international community.”

The signatures were collected throughout Japan from July to October 2014 in conjunction with meetings in which members heard the experiences of the hibakusha, survivors of the atomic bombings of Hiroshima and Nagasaki.

Upon receiving the signatures, Tony de Brum said, “I am deeply moved to receive this kind of support from the people of Japan. I know the people of the Marshall Islands will be as well. Our country has suffered terrible devastation from the nuclear weapons testing conducted in and around our islands from 1946 until 1958.” He went on to say, “All we ask is that the nuclear-armed nations fulfill their obligations to begin negotiations for nuclear disarmament. This is the only way we can ensure that no other country will suffer as we have. These signatures give me renewed faith that change is possible.”

David Krieger, President of the Nuclear Age Peace Foundation, a consultant to the Marshall Islands in their efforts to reach Nuclear Zero, commented, “It is this younger generation that is breaking the bonds of complacency which have been such a serious obstacle to change in the world. They give me hope that people throughout the world will now demand of their leaders the right to live in a world free from the threat of nuclear weapons.”

For further information, or if you would like to interview David Krieger or a representative of Soka Gakkai, contact Rick Wayman at rwayman@napf.org or call (805) 696-5159.