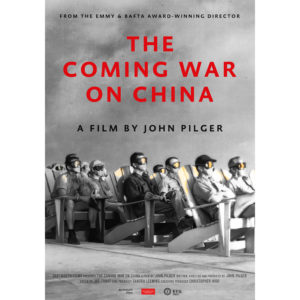 The Nuclear Age Peace Foundation invites you to a free screening of “The Coming War on China.” The latest film by John Pilger, the Emmy and BAFTA Award-winning director, has not yet been released in the United States.

Pilger reveals what the media doesn’t – that the world’s greatest military power, the U.S., and the world’s second economic power, China, both nuclear-armed, are on their way to war. Pilger’s film is a warning and an inspiring story of resistance.

The screening is free and open to the public. It takes place at the Faulkner Gallery in the Santa Barbara Public Library, 40 E. Anapamu Street, Santa Barbara, from 7-9 pm on Wednesday, May 10.