Dramatic Hearings at the International Court of Justice

This article was originally published by Lawyers Committee on Nuclear Policy. 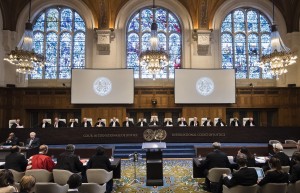 ICJ Judges on the opening day of the hearings. Copyright: UN Photo/ICJ-CIJ/Frank van Beek. Courtesy of the ICJ. All rights reserved.

From March 7 to 16, seven days of dramatic, intensely argued hearings were held in The Hague before the International Court of Justice (ICJ) on preliminary issues in the nuclear disarmament cases brought by the Republic of the Marshall Islands (RMI) against India, Pakistan, and the United Kingdom. The Marshall Islands’ legal team, led by former RMI foreign minister Tony deBrum and Amsterdam lawyer and longtime IALANA member Phon van den Biesen, performed brilliantly.

On the first day of the hearings, Tony deBrum riveted the courtroom with his explanation of why his small Pacific nation chose to resort to the Court. As a nine-year old child out fishing with his grandfather in March 1954, he saw the entire sky turn “blood red” as a result of the 15-megaton Bravo nuclear test explosion 200 miles away. Marshallese suffered dislocation and damage to their health and environment effects as a result of the 67 nuclear tests conducted by the United States from 1946 to 1958. He said: “While these experiences give us a unique perspective that we never requested, they are not the basis of this dispute. But they do explain why a country of our size and limited resources would risk bringing a case such as this regarding an enormous, nuclear-armed State such as India.”

On March 11, Phon van den Biesen told the Court that in law school he was taught de minimis non curat praetor – a court does not concern itself with trifles. The United Kingdom, he went on, was trying to introduce the opposite concept, de maximus non curat praetor. He commented that “such a concept does not exist and would be entirely incompatible with a world society that is based on the rule of law.” He added that the ICJ is capable of deciding cases that fall in the category maximus, having dealt with issues of genocide, violations of humanitarian law, use of force, and self-determination.

The Marshall Islands filed applications in the International Court of Justice against the nine nuclear-armed states in April 2014, claiming they are in violation of obligations under Article VI of the Nuclear Non-Proliferation Treaty and/or customary international law to pursue in good faith negotiations on cessation of the nuclear arms race at an early date and the elimination of nuclear weapons. The RMI asked the Court to declare that each state is failing to comply with its obligations and to order that it come into compliance within one year.

The initiative builds upon the ICJ’s 1996 Advisory Opinion. Referring to Article VI and to the long history of UN General Assembly resolutions on nuclear disarmament, the Court unanimously concluded: “There exists an obligation to pursue in good faith and bring to a conclusion negotiations leading to nuclear disarmament in all its aspects under strict and effective international control.” The Marshall Islands contends that this obligation applies universally, binding those few states outside the NPT, India, Israel, North Korea, and Pakistan.

Three of the nuclear-armed states, India, Pakistan, and the United Kingdom, have accepted the jurisdiction of the ICJ as to disputes involving states, including the Marshall Islands, which have done likewise. Those cases have proceeded. The other six states (China, France, Israel, North Korea, Russia, United States) refused the Marshall Islands’ request, under a normal procedure, that they accept the Court’s jurisdiction in this matter.

The recent hearings concerned the preliminary objections of India, Pakistan, and the United Kingdom to the Court deciding the cases on the merits. Pakistan withdrew from participation in the oral pleadings at the last minute, saying it had nothing to add to its written submission. Accordingly, the only hearing in that case, on March 8, was devoted to RMI’s response to Pakistan’s written arguments.

The United Kingdom claimed that it has a strong record of support for nuclear disarmament; consequently, it argued, there is no dispute for the Court to adjudicate. The RMI replied that actions speak louder than words, citing the UK’s consistent record of voting against resolutions in the General Assembly calling for commencement of multilateral negotiations on elimination of nuclear arms and its plans to replace its Trident nuclear weapons system.

India made a similar argument, referring to its decades-long history of calling for nuclear disarmament and its restraint in developing and deploying nuclear weapons. In reply, the RMI pointed to India’s current programs for expansion, improvement and diversification of its nuclear arsenal. In a dramatic moment, on March 14 Phon van den Biesen cited press reports that India had conducted a test of a submarine-launched ballistic missile on the first day of the hearings, and that India is poised to deploy a submarine carrying such missiles.

The UK and India also each argued that no bilateral dispute existed with the RMI prior to the filing of the cases; that the cases cannot proceed without other states possessing nuclear arms being before the Court; that the relief requested would be ineffective; and that various exceptions to their declarations accepting the jurisdiction of the Court apply, including India’s exclusion of disputes involving a multilateral treaty, here the NPT.

The RMI’s lawyers made strong counterarguments, with ample reference to precedent of the Court. They emphasized that India and the UK each can be judged as to its own conduct, regardless of the positions and actions of other nuclear-armed states. With regard to the NPT, on March 14 Professor Christine Chinkin explained that the RMI seeks the application of a customary international law obligation arising out of a dynamic process involving not only NPT Article VI but also developments including General Assembly and Security Council resolutions and the Court’s Advisory Opinion itself.