As we approach the 2020 Nuclear Non-Proliferation Treaty (NPT) Review Conference, it is important to reflect upon the current situation with nuclear weapons and the sliver of hope that humanity now has in the Treaty on the Prohibition of Nuclear Weapons.

As part of the grand bargain between the Nuclear Weapon Sates (NWS) and the Non-Nuclear Weapon States (NNWS), the NWS agreed that they would “pursue negotiations in good faith on effective measures relating to cessation of the nuclear arms race at an early date and to nuclear disarmament.” In exchange, the NNWS would not acquire nuclear weapons.

For decades, the NWS have not lived up to their part of their bargain to completely eliminate their nuclear weapons. Because of their opposition, 14,000 nuclear weapons still exist today. Additionally, the NWS have continuously modernized their nuclear weapons arsenals. In the case of the United States (U.S.), it plans to spend $494 billion over the next decade, which is an average of around $50 billion per year. Furthermore, according to the Center for Arms Control and Nonproliferation, U.S. modernization plans could cost as much as $1 trillion over the next three decades. Consequently, the NWS have continued to dangle Damocles’ Sword over the heads of all states and humanity.

At countless NPT Review meetings, the NWS claimed that the “conditions were not yet ripe” for them to disarm their nuclear weapons. They also praised themselves for agreeing upon on a glossary of terms as a “step” towards a world free of nuclear weapons.

Emergence of the TPNW

As it became increasingly clear that the NWS would not ban their nuclear weapons, the NNWS and Non-governmental Organizations (NGOs) said enough is enough and took matters into their own hands. These states recognized the missing legal gap in Article VI of the NPT in the form of a legal prohibition for the complete and total elimination of nuclear weapons as articulated in the Humanitarian Pledge.

With this in mind, the vast majority of states, in partnership with the International Campaign to Abolish Nuclear Weapons (ICAN), successfully negotiated a Treaty on the Prohibition of Nuclear Weapons in July of 2017 and one hundred and twenty two states voted in favor of the adoption of the treaty. The treaty unequivocally bans nuclear weapons once and for all. It is compatible with the NPT and is a necessary element for its implementation.

To date, eighty states have signed and thirty-four states have ratified it. Fifty states are required to ratify it before it enters into humanitarian law. Once it becomes part of international customary humanitarian law, it will create a legal norm against nuclear weapons and completely prohibit them.

To highlight the importance of the TPNW, the ICAN and international youth underscored the necessity for states to support the TPNW. ICAN underscored that:

14,000 nuclear weapons that exist in the world today pose an acute existential threat to all of us. No nation is immune to the radioactive fallout that would transcend national borders if these weapons were ever used again. No nation is immune to the climate disruption, agricultural and economic collapse, mass human displacement and famine that would inevitably follow even a limited nuclear war.

Additionally, young people reiterated that nuclear weapons remain an immediate threat facing humanity; and therefore, they must be banned.

Due to the fact that an overwhelming number of states have expressed their support for the TPNW and their opposition to the status quo, fifty states delivered statements in support of the treaty during First Committee.

Op 5, which calls upon those States in a position to do so to promote adherence to the Treaty through bilateral, sub regional, regional and multilateral contacts, outreach and other means;

Op. 6. Requests the Secretary-General, as depositary of the Treaty, to report to the General Assembly at its seventy-fifth session on the status of signature and ratification, acceptance, approval or accession of the Treaty;

In its national statement, the U.S. articulated that the TPNW “will not move us any closer to the eliminating nuclear weapons and has increased political divisions that make future disarmament efforts more difficult.” It further claimed that methodical approaches, such as creating the environment/conditions, including verification and compliance, will be more effective than the TPNW at achieving a world free of nuclear weapons.

Even though the U.S. claims that it supports the creation of an environment or conditions for nuclear disarmament, President Trump’s actions suggest otherwise. As described in the 2018 US Nuclear Posture Review, the Trump administration is interested in developing low-yield nuclear weapons. Further, the posture explicitly mentions the U.S. could employ nuclear weapons in response to “significant non-nuclear strategic attacks.” This includes but is not limited to “attacks on U.S., allied, or partner civilian population or infrastructure.” Furthermore, the document asserts that the U.S. “could employ nuclear weapons in response to “attacks on U.S. or allied nuclear forces, their command and control, or warning and attack assessment capabilities.” This new policy suggests that the U.S. would use nuclear weapons to respond to a cyber attack and categorically rejects a sole purpose policy. Considering the policies set forth in U.S. Nuclear Posture Review, it is hard to fathom that the U.S. cares about creating the environment or conditions for a world free of nuclear weapons.

The UK presented a similar argument, contending that the TPNW risks undermining the NPT and fails to address technical and procedural challenges that must be overcome to achieve nuclear disarmament.

Despite the opposition from the NWS and their allied states, the TPNW will enter into force extremely soon. In fact, as illustrated in the  Nuclear Weapons Ban Treaty Monitor, the rate of ratification and adherence to the TPNW amongst states after 24 months has been higher than the majority of other WMD treaties as is shown in the graph below. 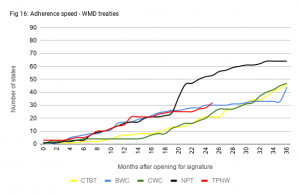 The entry into force of the TPNW will mark a new era for the international community. It will strengthen the rule of law and the NPT. It will also send a clear signal that the vast majority of states will not remain hostage to a small group of states.

We cannot continue to live on the precipice of annihilation. Thus, states and civil society groups must continue to collaborate to ensure that the TPNW- a robust complementary instrument to the NPT- enters into force.