I recently read this impressive autobiography by nonviolent activist David Hartsough, which I recommend highly.  David was born in 1940 and has been a lifelong participant and leader in actions seeking a more decent world through nonviolent means.  His guiding stars have been peace, justice, nonviolence and human dignity.  He has been a foe of all U.S. wars during his lifetime, and a conscientious objector to the Vietnam War.  He has lived his nonviolence and made it an adventure in seeking truth, as Gandhi did.  I will not try to recount the many adventures that he writes about, but they include civil rights sit-ins, blockading weapons bound for Vietnam, accompanying at-risk individuals in the wars in Central America and creating, with a colleague, a Nonviolent Peaceforce. 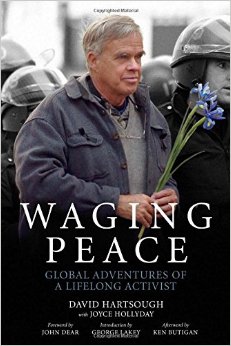 David has lived his life with compassion, commitment and courage.  He is principled, but also pragmatic.  He finds, “It is much easier to make friends than to fight enemies.”  He asks us to use our imaginations: “Imagine how the world would change if we recruited millions of people for the Peace Corps, nonviolent peace teams, and other constructive efforts, rather than for our military forces.  Think of how much safer we all would be if the world knew Americans as healers and teachers, builders of clinics and schools, and supporters of land reform, rather than as deadly dominators.”  Imagine what a different world that would be.

In addition to telling his life story, David has a chapter on “Transforming Our Society from One Addicted to Violence and War to One Based on Justice and Peace with the World.”  He also included sections on: Proposal for Ending All War; Resources for Further Study and Action; Ten Lessons Learned from My Life of Activism; and much more.

David Hartsough’s life is inspiring, and the lessons he draws from his experiences are valuable in paving the way to a world without war.  I encourage you to read his book on his lifelong efforts at Waging Peace.