Date From Hell: Can Nuclear War Be Fun and Games?

A scenario: You’re nearing the end of a blind date, waiting for the waiter to bring out the ice cream. Both of you are still trying to come up with fodder for conversation. You’ve covered the weather, countries you have visited, documentaries you liked, your favorite breeds of dogs, where to buy the best ground coffee.

Just then, your date declares with a smile, “So how about nuclear weapons? Wouldn’t using them be…well, sort of fun?  The collapse of modern society, or at least the end of the comforts we know? Imagine the thousands of immediate deaths, the damage to the Earth’s atmosphere and ecosystem. The famines. Oh, and I forgot the years of skyrocketing cancer cases!”

After you’ve finished staring, and blinking, after you’ve caught the waiter’s eye for the check, you might still be waiting for the punchline. No one could actually be so flip, so grotesquely cavalier about a grave danger to civilization — indeed, the gravest possible danger. Could they? Particularly with a new acquaintance they’re purportedly trying to woo? But I recently discovered this very discussion happening in reality, in the singularly strange world of “cyberdating.” 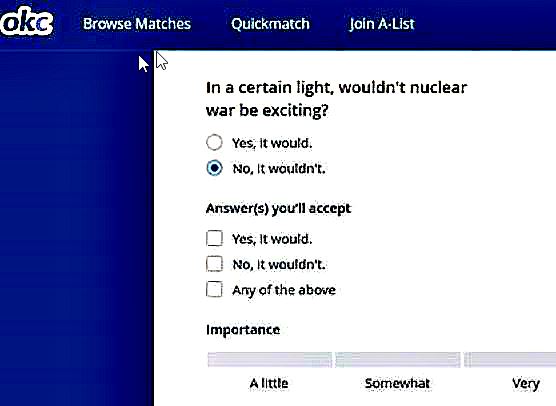 A screenshot of the OkCupid question about nuclear war.

For those who are still somehow unaware, Internet dating offers anyone the ability to post a profile on the Web about their likes and interests, typically with a photo. Users can then interact: send instant messages, talk, flirt. According to research, about 75% of single people are searching online for partners nowadays.

A friend told me to try OkCupid, the most popular dating site around. It was established 12 years ago and now has millions of regular users of every age group. One of the best-known features of OkCupid is its wealth of “match questions.” Once you join, the website — like a robot that’s been programmed to be endlessly, insatiably curious about what you love and hate — begins trying to discern the real you. A nearly endless stream of yes/no and multiple-choice questions continues for as long as you play along; the site suggests dating candidates based on your answers. Theoretically, it’s a matter of giving the algorithm of romance the food it needs to thrive and get smarter.

I spent some time grappling with the initial onslaught of questions, and at first most seemed somewhat reasonable. Would you consider dating someone who dislikes children? How shy would you say you are? Do you solely date people with athletic and toned bodies?

But then, the first day of my membership, this one appeared:

In a certain light, wouldn’t nuclear war be exciting?

I read the question several times, with emotions that included confusion, exasperation and anger. The hippest dating site on the Web was challenging me to answer a question that was not only inane but insane. I looked around to see if Rod Serling’s ghost was watching from a dim corner of the room.

I’m not alone in my puzzlement.

OkCupid for years has hosted online forums: message boards at which members can debrief about any question — how they answered it, and what the “best” answer might have been. The one on nuclear war clearly has been in active use by the dating site for many years, because as far back as 2008 it was sparking extended debate. That year, a site member (one of several) summarily condemned it:

“This is not even OK to even consider…” the site user wrote, “…unless you are an absolute idiot and have begun to believe the government/military attempts to make you think that such a thing would be survivable and wouldn’t be the end of life as we know it, which it would be.”

In 2011, people were still flocking to message boards to talk about the question, to defend how they answered it or (as before) to denounce it. One user called it “the most moronic question on this site.” A member in his late 50s identified himself as a former worker in the nuclear missile industry and declared that any use of such weapons would obviously be “a nightmare.”

“Actually many would survive,” he wrote. “But what would life on this planet be after that? Radiation clouds, radioactive rain, on and on…at least 10 years of death or more.”

On the message boards, lots of OkCupid users appear to agree with him, and this buoys my spirits. But there are also an unsettling number of comments by people standing by the notion that nuclear war might be the ultimate source of thrills. Many of these do not reach beyond a superficial concept of “excitement” to examine the widespread, unparalleled tragedy that a nuclear exchange would bring.

“It’s the end of civilization,” one site user writes. “How is that not exciting? I’m not saying it will be enjoyable in the slightest, but it will be fascinating. Literally a once in a lifetime event.”

Another, a 26-year-old man, posts that it stands to reason many people would find any big change in their prosaic existence to hold a certain allure. “People are craving anything to break the monotony of their droning, boring lives, and something that touches every individual would do that,” he writes. “Everyone wants to see an explosion, a house of cards fall over…”

But perhaps the most revealing (and disconcerting) remarks are by those romance-seekers who declare the prospect of nuclear war generates, for them, a responsive chord: memories of entertainment that they’ve enjoyed in the form of action-packed movies and video games. Specifically, they point to apocalyptic films about zombie invasions, or video games that ostensibly simulate the aftermath of nuclear cataclysm. 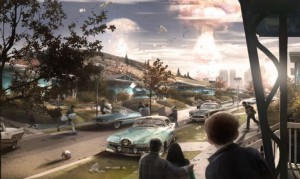 Fallout 4, released in 2015, had $750 million in sales on its first day of availability alone.

Take, for example, a wildly popular video game named Fallout. Quite a few OkCupid members mentioned it. In Fallout, which has appeared in several editions since 1997, the Earth after World War III is an exciting place to be, indeed. The latest version of the game is set in the bombed, charred remains of Boston in the year 2287, more than two centuries after nuclear bombs have devastated parts of the United States. Gamers take on the identity of “the Sole Survivor,” a heroic figure who emerges from a bomb shelter to search for a baby who was stolen and spirited away into the radioactive ruins of Beantown. Intricately detailed adventures await, with cutting-edge special effects, as players encounter bands of evil humans, “ghouls,” wild animals and even aliens. There are also “super mutants,” who previously were human but because of germ warfare have transformed into “massive, muscle-bound creatures with a natural immunity to radiation damage and disease,” according to information from gamers on the Wikia.com Fallout page. These characters are programmed to have no facial expressions other than “a permanent sneer,” and some of them have access to football-size nuclear weapons that can be launched by catapult.  And they’re not happy to see you.

Fallout 4 came out in November 2015, and an incredible 12 million copies of the game were sold in the first 24 hours. That amounted to about $750 million in income for the game manufacturer — breaking the first-day-of-release record for any game sold in 2015.

I honestly can’t get my head around that amount of money being spent in a day, especially on a game — let alone one that takes the worst existential peril humankind faces and seeks to turn it into a circus world that’s so amusing that it’s addictive. To compare, $750 million represents 6.2 times the top opening-day box office receipts of any movie in history (“Star Wars: The Force Awakens,” also in 2015). I also find it interesting, stepping away from fantasy, that the United States Institute of Peace, a bipartisan federal agency that works to mediate other nations’ conflicts without force and to find nonviolent ways for the U.S. to protect its interests, is now subsisting on a budget of roughly $35 million per year. Apples and oranges, perhaps, but show healthy skepticism if Joe Consumer says he has nothing left to spend on international amity.

Getting back to my experience on OkCupid: I never did get past the bizarre “match” question, and I have yet to become an active user of the dating site. As a supporter of nuclear abolition, for me the question became a vexing distraction that made me doubt the logic behind the site’s much vaunted software for playing matchmaker. True, the “nuclear war excitement” question apparently was first posed, a long time ago, as a suggestion by an ordinary site member, and I’m under no delusion that the average person is well-versed in the dreadful humanitarian effects of nuclear weapons use. We all know that lack of education and lack of empathy can be common.

But I would have hoped the cyber-romance mavens who created the site — Harvard grads all — would have realized the question’s folly, too, instead of officially embracing it and then allowing it to foul the interrogatory stream all these years. (OkCupid didn’t reply to requests for comment about this essay.)

Actually, I have a strong feeling that those who run the dating site know that more than a few of its questions are absurd. But hey, it’s essentially free to use, and maybe that deters complaints (the site is mainly financed by advertising). To quote Christian Rudder, a co-founder of OkCupid who used to maintain his own blog before leaving the company, “The basic currency of the Internet is human ignorance, and, frankly, our database holds a strong cash position.”

That was honest, at least.

Do a strange dating-website question and an astonishingly successful game about a nuclear wasteland offer much to inform us about the future of the nuclear abolition movement? Perhaps.

These fantastical opinions and fantastical games prove, I believe, that people — decades after the Cold War — still have tremendous interest in the sheer power of these weapons and at least some awareness of their capacity to create calamity on an epic scale.

Educating these people, especially the younger generation, about the immeasurable extent of suffering inherent in any nuclear war, is the great challenge for antinuclear activists everywhere.