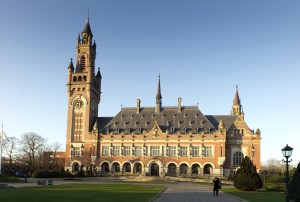 On October 5, the International Court of Justice declared that it does not have jurisdiction in the nuclear disarmament cases brought by the Republic of the Marshall Islands (RMI) against India, Pakistan and the United Kingdom (UK).

By an 8-8 vote, with President Ronny Abraham of France issuing the casting “no” vote, the Court declared that there was not sufficient evidence of a dispute between the RMI and the UK, and therefore the Court lacks jurisdiction. Similar judgments were issued in the cases against India and Pakistan, with those votes coming in at 9-7.

By dismissing the cases on the preliminary issue of jurisdiction, the Court did not examine the merits of the cases. The cases aimed to hold the nine nuclear-armed states (U.S., Russia, UK, France, China, Israel, India, Pakistan and North Korea) accountable for violating international law by failing to respect their nuclear disarmament obligations under the 1968 Nuclear Non-Proliferation Treaty (NPT) and customary international law.

In the 8-8 judgment in the UK case, the following judges voted against the Court having jurisdiction: Abraham (France); Owada (Japan); Greenwood (UK); Xue (China); Donoghue (U.S.); Gaja (Italy); Bhandari (India); and Gevorgian (Russia). According to the ICJ website, “A Member of the Court is a delegate neither of the government of his own country nor of that of any other State. Unlike most other organs of international organizations, the Court is not composed of representatives of governments.” It is striking to note, however, that six of the judges come from nuclear-armed states, while the other two (Japan and Italy) are deeply invested in the U.S. “nuclear umbrella.”

The RMI showed remarkable courage and foresight in bringing these cases to the ICJ. When the cases were filed on April 24, 2014, Tony de Brum, Co-Agent of the Marshall Islands, said, “Our people have suffered the catastrophic and irreparable damage of these weapons, and we vow to fight so that no one else on earth will ever again experience these atrocities. The continued existence of nuclear weapons and the terrible risk they pose to the world threaten us all.”

These cases brought by the Marshall Islands have inspired activists around the world and have demonstrated to other non-nuclear weapon states that it is possible to stand up to the nuclear-armed countries to demand justice.