Conference on the Nexus between Climate Change and International Security 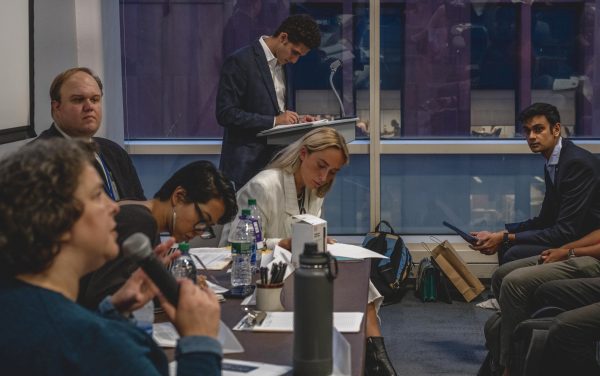 Dr. Drozdenko spoke candidly about the dangers of the receding ice caps in Greenland, which, as a result of climate change, will expose radioactive waste from the US that has been buried under the ice since the height of the Cold War. Further, she also discussed the “Castle Bravo” thermonuclear test, which caused significant radioactive fallout in the Marshall Islands. In order to “trap” the radiation, the US built the Runit Dome, which is slowly being cracked and worn down by the rising sea levels in the Pacific.  She also discussed how the water crisis in Kashmir could exacerbate tensions between Pakistan and India, two nuclear-armed states. 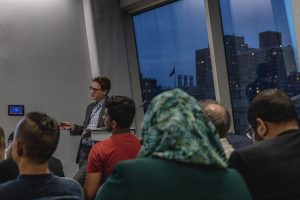 Mr. Shelden introduced the International Campaign to Abolish Nuclear Weapons (ICAN) and the Treaty on the Prohibition of Nuclear Weapons (TPNW). Mr. Shelden spoke about TPNW’s positive obligations, including its provisions on victim assistance and environmental remediation. Additionally, Mr. Shelden underscored the necessity for activists to broaden the climate crisis discussion to include the possibility of an abrupt nuclear winter.  In this regard, he discussed how the effects of a limited nuclear war between India and Pakistan could impact the global surface temperature and cause a decline in food production that would put two billion people at risk.

Ms. Umayam shared her decision to engage with the Navajo communities living near contaminated uranium mines. She also presented her unique project, Ways of Knowing, in which she works with the Navajo communities to rebuild themselves through traditional storytelling and citizen science. This  multimedia project reveals personal experiences and injustices linked to the enviromental impact of nuclear testing in order to understand the profound consequences of the U.S. Nuclear Weapons Policy. In essence, the project illustrates both the humanitarian and environmental impacts of nuclear weapons in the US and the necessity for citizens, especially those affected by nuclear weapons, to engage in the nuclear conversation. More information about the project can be found here. 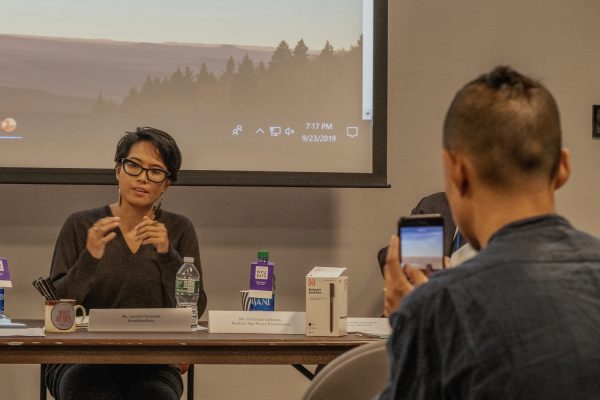 Mr. Ciobanu was our penultimate speaker. He provided further insights on the exposure of nuclear waste from the dome in the Marshall Islands and described both the humanitarian and enviromentals impacts of nuclear testing in the Marshall Islands. He also shared Columbia University’s recent studies about a possible nuclear dumping site on Naen Island, Rongelap Atoll. He also detailed the works of Ms. Darlene Keju, Marshallese activist and educator; and Mr. Tony deBrum, former Marshallese politician, and their methods of disarmament activism. Mr. Ciobanu also highlighted deBrum’s strong leadership in the climate movement. Significantly, deBrum succeeded in forming the High Ambition Coalition, a coalition between developing and developed countries to hold global temperatures to a 1.5C increase. Mr. Ciobanu then placed a strong emphasis on youth involvement by showing a video featuring Ms. Kathy Jetnil Kijiner, a Marshallese youth activist, and explaining how students can be involved in both climate action and disarmament activism.

Ms. Simonsen wrapped up our event by highlighting Peace Boat US, a non-governmental organization that is focused on human rights, maintaining peace, and environmental protection.  The organization hosts study programs, collaborates with Nobel Peace Laureates, and promotes peace education by having guest educators engage students in onboard activities, conferences, workshops, and cultural exchange opportunities. Moreover, as detailed by Ms. Simonsen, Peace Boat has oceans and climate youth ambassadors from Small Island Developing States (SIDS). These young people are on the frontlines of climate change and marine degradation. Several of them are also tackling the effects of nuclear testing in the South Pacific. Finally, Ms. Simonsen discussed Peace Boat’s “Youth for Disarmament,” a joint initiative with the UN Office for Disarmament Affairs.