Compassionate Convictions Mixed with a Will of Steel

The sad news came today that Judge Christopher Weeramantry, a long-time member of the Foundation’s Advisory Council, passed away today (January 5, 2017) in Colombo, Sri Lanka.  Judge Weeramantry was a great man who made significant contributions to law and ethics.  His values set a high-water mark for jurists, and these will undoubtedly be carried forward by his writings and by his many students and colleagues.  In 1996, when  he was vice president of the International Court of Justice, he wrote a dissent to the Court’s Advisory Opinion on the legality of the threat or use of nuclear weapons.  In my opinion, his dissent stands as the best legal analysis ever made of the threat or use of nuclear weapons being illegal in “any circumstances whatsoever.”

It was a privilege to have known and worked with Judge Weeramantry.  What follows is the contribution I prepared for a felicitation volume honoring Judge Weeramantry that was organized for his 90th birthday in November 2016.

I have known Judge Weeramantry for many years; and before I had the pleasure of knowing him, I admired his work from afar.  We have worked together on issues of nuclear weapons abolition and served together as councilors on the World Future Council.  He is outwardly calm, kind and warm, while inwardly he is a unique blend of deep and compassionate convictions mixed with a will of steel. 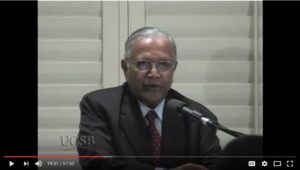 Judge Weeramantry was honored by the Nuclear Age Peace Foundation on April 12, 2008.

Judge Weeramantry has a keen legal mind, which he has used effectively and courageously in support of a world free of nuclear weapons.  I deeply admire Judge Weeramantry for the clarity of his thinking in combination with the compassion of his vision of a more decent world.  He has served humanity in many ways, but in no way more importantly than his insistence that nuclear weapons are illegal and must be abolished.

During the 1980s, Judge Weeramantry prepared and published a Proposed United Nations Declaration of Scientific Responsibility in Relation to Nuclear Weapons.  The following are two far-sighted paragraphs from this document:

Place beyond doubt the illegality of the use of nuclear weapons, having regard to its violation of the principles of proportionality, discrimination, aggravation of pain and suffering, nullification of a return to peace and inviolability or neutral states

Aware that the use of nuclear weaponry would undoubtedly result in ecocide, genocide and, if there are any survivors, in massive intergenerational damage

The document builds toward the conclusion that work on nuclear weapons in any form constitutes crimes under international law, and therefore “calls upon all scientists and technologists throughout the world to abide by the legal and ethical obligations outlined in this document and to desist from any activity involving the development, production, testing, possession, deployment or use of nuclear weapons.”

During his tenure as a Judge on the International Court of Justice (ICJ), the court considered the United Nations General Assembly’s request for an Advisory Opinion “on the Legality of the threat or use of nuclear weapons.”  Whereas the majority of the judges, with the President casting the deciding vote, found in their 1996 Advisory Opinion that such threat or use would be “generally illegal,” Judge Weeramantry found that the threat or use of nuclear weapons would be illegal in any circumstances whatsoever.  He was uncompromising in his stance.  No matter how extreme the circumstances, nuclear weapons could not be used without violating international humanitarian law.

Judge Weeramantry wrote a brilliant and comprehensive dissent to the Court’s Advisory Opinion in the case.  The opening words of his dissent were these: “My considered opinion is the use or threat of use of nuclear weapons is illegal in any circumstances whatsoever.”  In the next paragraph of his dissent, he stated, “I regret that the Court has not held directly and categorically that the use or threat of use of the weapon is unlawful in all circumstances without exception.  The Court should have so stated in a vigorous and forthright manner which would have settled this legal question now and forever.”

In reaching the end of his nearly 100-page dissent, Judge Weeramantry stated, “No issue could be fraught with deeper implications for the human future, and the pulse of the future beats strong in the body of international law.  This issue has not thus far entered the precincts of international tribunals.  Now that it has done so for the first time, it should be answered – convincingly, clearly and categorically.”

I have always felt that Judge Weeramantry’s dissent in this case was a high-water mark for humanity in the Nuclear Age.  It is wise and insightful.  He makes clear that it is not possible for the law to allow for the threat or use of weapons capable of destroying most or all life on the planet.  I look to the day in the future when the ICJ will return to the question of the legality of the threat or use of nuclear weapons, and will find upon reading and studying the Weeramantry dissent that the path has already been set forth by him for an uncompromising legal opinion that makes it clear that the threat or use of nuclear weapons is illegal under all circumstances, without exception.

In 2013, Judge Weeramantry prepared an important Briefing Paper for the Nuclear Age Peace Foundation, which the Foundation distributed at the second preparatory meeting of the 2015 Non-Proliferation Treaty Review Conference.  The Briefing Paper was titled, “Good Faith: Essential to Nuclear Disarmament and Human Survival.”  Judge Weeramantry, building on article VI of the Non-Proliferation Treaty and the ICJ Advisory Opinion discussed above, made the argument that good faith was not optional, but essential for the international system to work.  His study of good faith in relation to nuclear disarmament led to the following conclusion:

We are left with no other conclusion than that good faith in regard to nuclear disarmament is a basic requirement of law, of morality, of humanitarianism, and of concern for the human future. It is required by international law. It is undertaken by treaties, such as the Non-Proliferation Treaty. It is prescribed by the International Court of Justice. Neither law nor religion nor morality nor civilization can permit the slightest deviation from this duty of good faith, departure from which will make the cruelties of the past pale into insignificance.

In 2008, I had the pleasure of presenting Judge Weeramantry with the Nuclear Age Peace Foundation’s Lifetime Achievement Award, an award presented to “outstanding individuals who have made significant long-term contributions to building a more peaceful world.”  He fills this description in every way.  He is a man with a keen intellect dedicated to peace and international law, and he has a heart large enough to encompass all of humanity.  I feel fortunate to be his colleague, and even more so to be his friend.