California Leads the Way in Support of Nuclear Disarmament

CALIFORNIA LEADS THE WAY IN SUPPORT OF NUCLEAR DISARMAMENT

Sacramento–Assembly Joint Resolution 33 (AJR 33), introduced by Santa Barbara’s State Assembly member, Monique Limón, passed in the state Senate today by a vote of 25 to 10. This marks a huge step forward in California’s support of nuclear disarmament and puts the state at the forefront of this critical issue.

The resolution calls on federal leaders and our nation to embrace the Treaty on the Prohibition of Nuclear Weapons, make nuclear disarmament the centerpiece of our national security policy, and spearhead a global effort to prevent nuclear war. (More on the Treaty here.)

Rick Wayman, Deputy Director of the Nuclear Age Peace Foundation, a non-partisan, non-profit organization headquartered in Santa Barbara whose mission is to create a peaceful world, free of nuclear weapons, was asked by Limón to testify in support of the Resolution.

BREAKING: #California State Legislature passes resolution in support of Treaty on the Prohibition of Nuclear Weapons and nuclear disarmament. Thanks for your leadership, @AsmMoniqueLimon. #nuclearban https://t.co/pV5wp8eXUf

Wayman spoke in front of the California State Assembly in Sacramento on August 14, saying, in part, “This resolution lays out some of the catastrophic humanitarian consequences that could occur should nuclear weapons be used again. I have worked closely with people around the world deeply impacted by nuclear weapons development, testing, and use. Every one of them tells me the same thing: we must put an end to nuclear weapons so that no one ever suffers this same fate.”

Wayman continued, “California, followed by the entire United States, must get on the right side of history. But more importantly, we must do everything in our power to eliminate nuclear weapons before they eliminate us.” (Read Wayman’s remarks here.)

Currently, the U.S. government has a $717 billion military budget and a plan to spend $1.7 trillion on nuclear weapons over the next 30 years. That’s why it’s so important for California and other states (and cities) around the country to speak out. Imagine what could be done to make the world a better place by diverting even part of that money to productive, not destructive purposes. 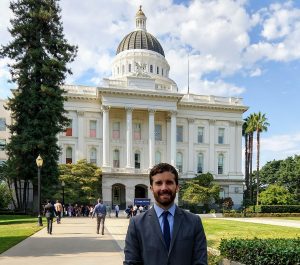