“Nukes, in other words, would be America’s third-highest national priority, ever. Along the way, the weapons would evolve from a strategy into a policy into a faith.” –Dan Zak, Almighty, p. 23 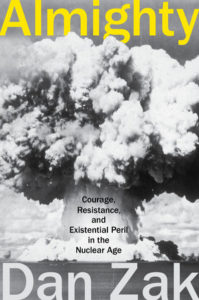 Almighty, by Dan Zak, is a compelling new book that exposes the intimate truths behind the 2012 Y-12 break-in through the lens of the peace-activist perpetrators.  Fluidly weaving between the past and the present, this intriguing true-story resembles more of a thriller novel than that of a mundane biography. As the unique background of all three activists, Sister Megan Rice, Michael Walli, and Greg Boertje-obed, unfolds the egregious history of nuclear weapons elucidates the United States’ futile attempt at non-proliferation.

A house painter, a Vietnam War veteran, and an 82 year old Catholic sister, broke into the “Fort Knox of Uranium” (Y-12) in an act of civil disobedience for the sake of mankind. Considered to be one of the most secure facilities in the world, Y-12 was easily penetrated with wire cutters and a courageous death wish. The three peace activists hoped to stop the production of nuclear weapons or, simply, bring awareness to their cause. However, inadvertently, the success of their mission spawned significant national security concerns and shed light on the inherent fault in nuclear facilities: human error.

The novel is broken down into three sections: action, reaction, and relativity/uncertainty. In Part I, Action, Zak describes the history and intricacies of the Manhattan Project as well as provides an in-depth description of the Y-12 break-in. Created by the intellectual elite of Columbia University, the Manhattan Project outlined a clear and destructive path to combat the fear and rise of the Third Reich. The atom became a destructive force displayed in the acts of Hiroshima and Nagasaki. However, “ All the while, a counterforce pushed back. Men and women of science, and of faith, believed that humanity was too fragile to tangle with the almighty. The mere possession of nuclear weapons, to them, was a wish for death” (p. 24). In the time of scientific innovation, Manhattan became the soil in which Megan Rice sprouted her anti-nuclear activism.

One of the most intriguing sections in Almighty is Part II, Reaction. In this section, an entire chapter is dedicated to the background and history of Oak Ridge.  Oak Ridge, an eerie Cold-War era community dedicated to the production of Uranium at Y-12, prides itself on ‘protecting America’s future’.  City festivals and moments of silence commemorate the city’s important role in producing nuclear weapons as well as act as a tool of societal enforcement with regards to the acceptance of nuclear weapons. Historically, Y-12 was a community secret and often employees were unknowingly contributing to the production of uranium. One Oak Ridge citizen recalls, “Her grandmother, who worked at Y-12, was told she was helping to make ice cream” (p.185).

Almighty continues into the aftermath of the Y-12 break-in where the three peace activists were tried for criminal trespassing and destruction of federal property. The court trials touch on the American nuclear weapons paradox regarding morality and the façade of national security. As the judge deliberates between motive, morality, and actions, the reader is taken through the labyrinth that is the jaded American nuclear debate.  To illustrate the complexities of the American nuclear relationship, Zak references the youthful Barack Obama in 1983 at Columbia University. In Obama’s student newspaper article Breaking the War Mentality, “His last sentence envisioned a peace ‘that is genuine, lasting, and non-nuclear (p.148).” Yet, the Obama administration has provided little support towards this approach. Clearly the discourse regarding both the struggle to justify nuclear weapons or encourage non-proliferation is inadequate. The activists answered this challenge with radical action.

Almighty covers substantial nuclear weapon modern history, and the morality behind these destructive human designs. Topics further discussed include the court proceedings, life and background of the activists, Hiroshima and Nagasaki, the Marshall Islands, and the Iran-Nuclear Deal.

Armed with a few hammers and a heavy conscience, these religiously motivated peace-activists hung banners, graffitied biblical verses, and streaked human blood across the exterior of Y-12.  Their motivations and respective moral compasses are eloquently revealed in the pages of such chaos. Binding American power, the case for nuclear weapons transforms into 2016 relevance through Almighty.