The International Campaign to Abolish Nuclear Weapons (ICAN) received the Nobel Peace Prize at a ceremony in Oslo on December 10, 2017.

Your Majesties,
Members of the Norwegian Nobel Committee,
Esteemed guests, 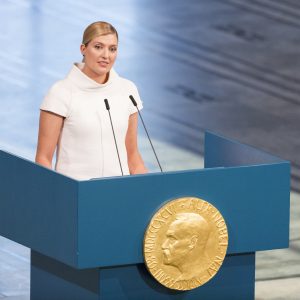 Today, it is a great honour to accept the 2017 Nobel Peace Prize on behalf of thousands of inspirational people who make up the International Campaign to Abolish Nuclear Weapons.

Together we have brought democracy to disarmament and are reshaping international law.
__

We most humbly thank the Norwegian Nobel Committee for recognizing our work and giving momentum to our crucial cause.

We want to recognize those who have so generously donated their time and energy to this campaign.

We thank the courageous foreign ministers, diplomats, Red Cross and Red Crescent staff, UN officials, academics and experts with whom we have worked in partnership to advance our common goal.

And we thank all who are committed to ridding the world of this terrible threat.
__

At dozens of locations around the world – in missile silos buried in our earth, on submarines navigating through our oceans, and aboard planes flying high in our sky – lie 15,000 objects of humankind’s destruction.

Perhaps it is the enormity of this fact, perhaps it is the unimaginable scale of the consequences, that leads many to simply accept this grim reality. To go about our daily lives with no thought to the instruments of insanity all around us.

For it is insanity to allow ourselves to be ruled by these weapons. Many critics of this movement suggest that we are the irrational ones, the idealists with no grounding in reality. That nuclear-armed states will never give up their weapons.

Ours is the only reality that is possible. The alternative is unthinkable.

The story of nuclear weapons will have an ending, and it is up to us what that ending will be.

One of these things will happen.

The only rational course of action is to cease living under the conditions where our mutual destruction is only one impulsive tantrum away.
__

Today I want to talk of three things: fear, freedom, and the future.

By the very admission of those who possess them, the real utility of nuclear weapons is in their ability to provoke fear. When they refer to their “deterrent” effect, proponents of nuclear weapons are celebrating fear as a weapon of war.

They are puffing their chests by declaring their preparedness to exterminate, in a flash, countless thousands of human lives.

Nobel Laureate William Faulkner said when accepting his prize in 1950, that “There is only the question of ‘when will I be blown up?’” But since then, this universal fear has given way to something even more dangerous: denial.

Gone is the fear of Armageddon in an instant, gone is the equilibrium between two blocs that was used as the justification for deterrence, gone are the fallout shelters.

But one thing remains: the thousands upon thousands of nuclear warheads that filled us up with that fear.

The risk for nuclear weapons use is even greater today than at the end of the Cold War. But unlike the Cold War, today we face many more nuclear armed states, terrorists, and cyber warfare. All of this makes us less safe.

Learning to live with these weapons in blind acceptance has been our next great mistake.

Fear is rational. The threat is real. We have avoided nuclear war not through prudent leadership but good fortune. Sooner or later, if we fail to act, our luck will run out.

A moment of panic or carelessness, a misconstrued comment or bruised ego, could easily lead us unavoidably to the destruction of entire cities. A calculated military escalation could lead to the indiscriminate mass murder of civilians.

If only a small fraction of today’s nuclear weapons were used, soot and smoke from the firestorms would loft high into the atmosphere – cooling, darkening and drying the Earth’s surface for more than a decade.

It would obliterate food crops, putting billions at risk of starvation.

Yet we continue to live in denial of this existential threat.

But Faulkner in his Nobel speech also issued a challenge to those who came after him. Only by being the voice of humanity, he said, can we defeat fear; can we help humanity endure.

ICAN’s duty is to be that voice. The voice of humanity and humanitarian law; to speak up on behalf of civilians. Giving voice to that humanitarian perspective is how we will create the end of fear, the end of denial. And ultimately, the end of nuclear weapons.
__

That brings me to my second point: freedom.

As the International Physicians for the Prevention of Nuclear War, the first ever anti-nuclear weapons organisation to win this prize, said on this stage in 1985:

“We physicians protest the outrage of holding the entire world hostage. We protest the moral obscenity that each of us is being continuously targeted for extinction.”

We must reclaim the freedom to not live our lives as hostages to imminent annihilation.

Man – not woman! – made nuclear weapons to control others, but instead we are controlled by them.

They made us false promises. That by making the consequences of using these weapons so unthinkable it would make any conflict unpalatable. That it would keep us free from war.

But far from preventing war, these weapons brought us to the brink multiple times throughout the Cold War. And in this century, these weapons continue to escalate us towards war and conflict.

In Iraq, in Iran, in Kashmir, in North Korea. Their existence propels others to join the nuclear race. They don’t keep us safe, they cause conflict.

As fellow Nobel Peace Laureate, Martin Luther King Jr, called them from this very stage in 1964, these weapons are “both genocidal and suicidal”.

They are the madman’s gun held permanently to our temple. These weapons were supposed to keep us free, but they deny us our freedoms.

It’s an affront to democracy to be ruled by these weapons. But they are just weapons. They are just tools. And just as they were created by geopolitical context, they can just as easily be destroyed by placing them in a humanitarian context.
__

That is the task ICAN has set itself – and my third point I wish to talk about, the future.

I have the honour of sharing this stage today with Setsuko Thurlow, who has made it her life’s purpose to bear witness to the horror of nuclear war.

She and the hibakusha were at the beginning of the story, and it is our collective challenge to ensure they will also witness the end of it.

They relive the painful past, over and over again, so that we may create a better future.

There are hundreds of organisations that together as ICAN are making great strides towards that future.

There are thousands of tireless campaigners around the world who work each day to rise to that challenge.

There are millions of people across the globe who have stood shoulder to shoulder with those campaigners to show hundreds of millions more that a different future is truly possible.

Those who say that future is not possible need to get out of the way of those making it a reality.

As the culmination of this grassroots effort, through the action of ordinary people, this year the hypothetical marched forward towards the actual as 122 nations negotiated and concluded a UN treaty to outlaw these weapons of mass destruction.

The Treaty on the Prohibition of Nuclear Weapons provides the pathway forward at a moment of great global crisis. It is a light in a dark time.

And more than that, it provides a choice.

A choice between the two endings: the end of nuclear weapons or the end of us.

All of us face that choice. And I call on every nation to join the Treaty on the Prohibition of Nuclear Weapons.

To the nations who believe they are sheltered under the umbrella of nuclear weapons, will you be complicit in your own destruction and the destruction of others in your name?

To all nations: choose the end of nuclear weapons over the end of us!

This is the choice that the Treaty on the Prohibition of Nuclear Weapons represents. Join this Treaty.

We citizens are living under the umbrella of falsehoods. These weapons are not keeping us safe, they are contaminating our land and water, poisoning our bodies and holding hostage our right to life.

To all citizens of the world: Stand with us and demand your government side with humanity and sign this treaty. We will not rest until all States have joined, on the side of reason.
__

No nation today boasts of being a chemical weapon state.
No nation argues that it is acceptable, in extreme circumstances, to use sarin nerve agent.
No nation proclaims the right to unleash on its enemy the plague or polio.

That is because international norms have been set, perceptions have been changed.

And now, at last, we have an unequivocal norm against nuclear weapons.

With every new signatory and every passing year, this new reality will take hold.

This is the way forward. There is only one way to prevent the use of nuclear weapons: prohibit and eliminate them.
__

Nuclear weapons, like chemical weapons, biological weapons, cluster munitions and land mines before them, are now illegal. Their existence is immoral. Their abolishment is in our hands.

The end is inevitable. But will that end be the end of nuclear weapons or the end of us? We must choose one.

We are a movement for rationality. For democracy. For freedom from fear.

We are campaigners from 468 organisations who are working to safeguard the future, and we are representative of the moral majority: the billions of people who choose life over death, who together will see the end of nuclear weapons.