Auckland Statement on the Treaty on the Prohibition of Nuclear Weapons

The TPNW and the Pacific

1. Pacific countries (Cook Islands, Fiji, Kiribati, Nauru, New Zealand, Palau, Papua New Guinea, Samoa, Solomon Islands, Tonga, Tuvalu and Vanuatu) came together in Auckland from 5-7 December 2018 to discuss the Treaty on the Prohibition of Nuclear Weapons (TPNW), to take stock of the Treaty from a regional perspective, to assess its prospects for advancing nuclear disarmament and global security, and to canvass progress toward its entry into force.

2. The Conference took place at a time of increasing concern in the Pacific region, and globally, regarding the slow pace of progress toward a nuclear weapon-free world and the serious implications of this (including for the Nuclear Non-Proliferation Treaty (NPT)) in view of the lack of progress in implementation of the nuclear disarmament obligation of Article VI.

3. Rising tensions, the modernisation of nuclear arsenals, the continued reliance on nuclear weapons in military and security concepts as well as on high alert postures, and threats regarding the possible use of nuclear weapons are widely seen as increasing the risk of a deliberate or accidental nuclear detonation.

4. For its part, the Pacific is only too well aware of the catastrophic consequences of any nuclear detonation as a result of its own experience with over 300 nuclear weapon tests carried out  over  many  years  and  which  has  resulted  in  long-term humanitarian  and environmental harm to parts of the region. Efforts by Pacific countries to stop this testing; to “promote the national security of each country in the region and the common security of all”; and, so far as lies within the region’s power, to retain “the bounty and beauty of [its] land and sea”; were key factors in the adoption of the Treaty of Rarotonga in 1985 and its establishment of the South Pacific Nuclear Free Zone.

6. Building on their full support for the NPT as the cornerstone of nuclear disarmament, and for other aspects of the global nuclear disarmament and non-proliferation regime including the Comprehensive Nuclear Test-Ban Treaty (CTBT), many Pacific countries took an active part in the Humanitarian Initiative on Nuclear Weapons with Pacific voices bearing witness to the horrors of nuclear weapon testing. Many Pacific countries were active, too, in the subsequent negotiations which resulted in the adoption of the TPNW on 7 July In this, they were giving reality to the words of the Pacific Conference of Churches that nuclear weapons “are no good for the Pacific, and no good for the world”.

7. Five Pacific countries had already ratified the TPNW (Cook Islands, New Zealand, Palau, Samoa, and Vanuatu), and three others had signed it (Fiji, Kiribati, and Tuvalu) by the time of the convening in Auckland of the Pacific Conference.

8. The Pacific Conference on the TPNW was hosted by New Zealand with an opening reception and welcome remarks given by the New Zealand Minister for Disarmament and Arms Control, Deputy Prime Minister, Rt Hon Winston Noting the increasing risks which nuclear weapons entail, Minister Peters expressed his hope that the region would be as strong in its support for the TPNW as it had been for the Treaty of Rarotonga. He conveyed New Zealand’s willingness to partner with its Pacific neighbours in carrying forward priority topics identified for action in the UN Secretary-General’s recent “Agenda for Disarmament”.

9. A “Global Youth Forum on Nuclear Disarmament and the Treaty on the Prohibition of Nuclear Weapons” was held concurrently with the Conference attendees welcomed the opportunity to engage with youth participants from NZ and from the wider Pacific, as well as further afield. 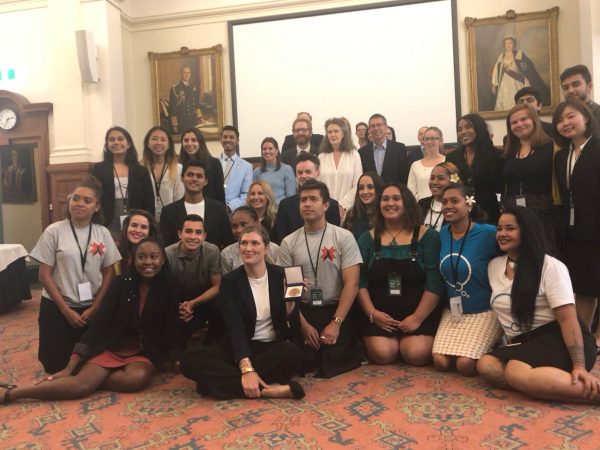 10. In a video message to the Conference at its outset, New Zealand’s Prime Minister, Rt Hon Jacinda Ardern, described the TPNW as a significant first step towards the elimination of nuclear weapons. She invited Pacific countries to join together in supporting it and taking the Treaty of Rarotonga global.

11. A statement was also delivered on behalf of the Minister of Foreign Affairs of Vanuatu, Hon Ralph Regenvanu, highlighting the two key issues for Pacific countries of nuclear disarmament and climate change. Pacific Island nations must “continue to work in unity against the use of nuclear weapons for our good and, most importantly, for the good of our future generations”.

12. Keynote speaker, Beatrice Fihn – Executive Director of the International Campaign to Abolish Nuclear Weapons (ICAN), the 2017 Nobel Peace Prize laureate – conveyed ICAN’s pride in standing with Pacific nations to advance the Noting that “voices from the Pacific continue to bear witness to the horrors of nuclear weapon testing”, she attributed the awarding of the Nobel Prize in part to ICAN’s work with Pacific survivors of testing. She stressed the lack of an effective response capacity to any use of nuclear weapons, and observed that “the only way to prevent nuclear weapons from harming us is by getting rid of them – no other solution is realistic.”

13. The participation at the Conference of representatives from Austria, Brazil, Ireland and South Africa – members of the Core Group which led the adoption of the TPNW – was welcomed by all The Conference also benefitted from presentations by colleagues from Auckland and Princeton Universities and input from the New Zealand Red Cross on behalf also of the Red Cross Movement.

14. Participants noted that the TPNW was fully consistent with the existing nuclear disarmament and non-proliferation regime including the NPT and Equally, they emphasised the consistency of the TPNW with regional instruments, most notably the Treaty of Rarotonga, but also the recent Boe Declaration on Regional Security which reaffirms the importance of the rules-based international order founded on the UN Charter, and adherence to international law, and which outlines an expanded concept of security inclusive of human security and humanitarian assistance. It was also highlighted that the TPNW, and efforts to advance nuclear disarmament, support progress in attainment of the UN’s Sustainable Development Goals, in particular SDG 16 with its focus on peace, justice and strong institutions.

15. Conference participants accepted the clear moral and humanitarian rationale for joining the Recalling the words of a former UN Secretary-General that “there are no right hands for wrong weapons”, the advantage of the TPNW’s unambiguous prohibition of nuclear weapons was noted both in advancing disarmament and in reducing the incentive for proliferation. A number of those who had already ratified the TPNW conveyed their pride at their country’s leadership on this issue. Palau had led the way for the region, being the first to ratify the Treaty.

16. Participants exchanged views on key provisions of the Discussion on Article 1 of the TPNW centred on the range of prohibitions which were included in that Article as well as those activities (such as military co-operation and transit) which were not prohibited. Discussion on Article 2 revealed that one country, with praise-worthy promptness, had already forwarded its declaration to the UN Secretary-General.

17. The discussion under Article 3 highlighted the region’s commitment to meeting its International Atomic Energy Agency (IAEA) safeguards In this regard, it was noted that almost all Pacific countries (and all attendees at the Pacific Conference) do have a Comprehensive Safeguards Agreement in place and a considerable number have also adopted the Additional Protocol. Under the TPNW, if a State has the Additional Protocol in place at the time of entry into force of the Treaty, it must retain this as its minimum standard.

18. Discussion on Article 7 served to emphasise the region’s strong interest in its provisions for victim assistance and environmental remediation of contaminated Access to such assistance was recognised as being of importance in the region in view of the legacy of nuclear testing.

19. Emphasis was given to the obligation in Article 12 to promote universal adherence of all states to the Treaty.

Next Steps on the TPNW

20. It was recognised that the Pacific region has a role to play in adding its voice to the global effort to strengthen the norm against these inhumane weapons and to increase their In the Pacific, “we are small, but we can have a big impact.”

21. Participants acknowledged the need to expedite the Treaty’s entry into force and lend weight to efforts to advance its A range of options were discussed for taking the TPNW forward in the region, as well as the potential to work with other regions around the world. Wider ratification in the Pacific region would be assisted by greater awareness-raising and by ensuring capacity for its implementation.

22. In this regard, the range of offers of assistance to regional countries in moving forward with the Treaty – including from New Zealand, Core Group countries, the New Zealand Red Cross and International Committee of the Red Cross (ICRC), as well as by Auckland and Princeton Universities, and by ICAN – were welcomed by participants.

23. Participants were also encouraged to make use of the existing assistance tools including the Signature and Ratification Kit for the Treaty published by the ICRC as well as the Information Kit on Signature and Ratification published by the UN Office of Disarmament Affairs (ODA). Use could also be made of the recent publication entitled “The TPNW: Setting the Record Straight” produced by the Norwegian Academy of International Law, and a range of other resources.