NAPF is proud to showcase the work of artists drawing attention to the dangers of a heedless and overweening technological apparatus, whether in the form of nuclear weapons, carbon dependence, or relentless resource extraction. Below you can find some of the images on our website, with brief biographies of the artists, notes on their work, and links to their websites. 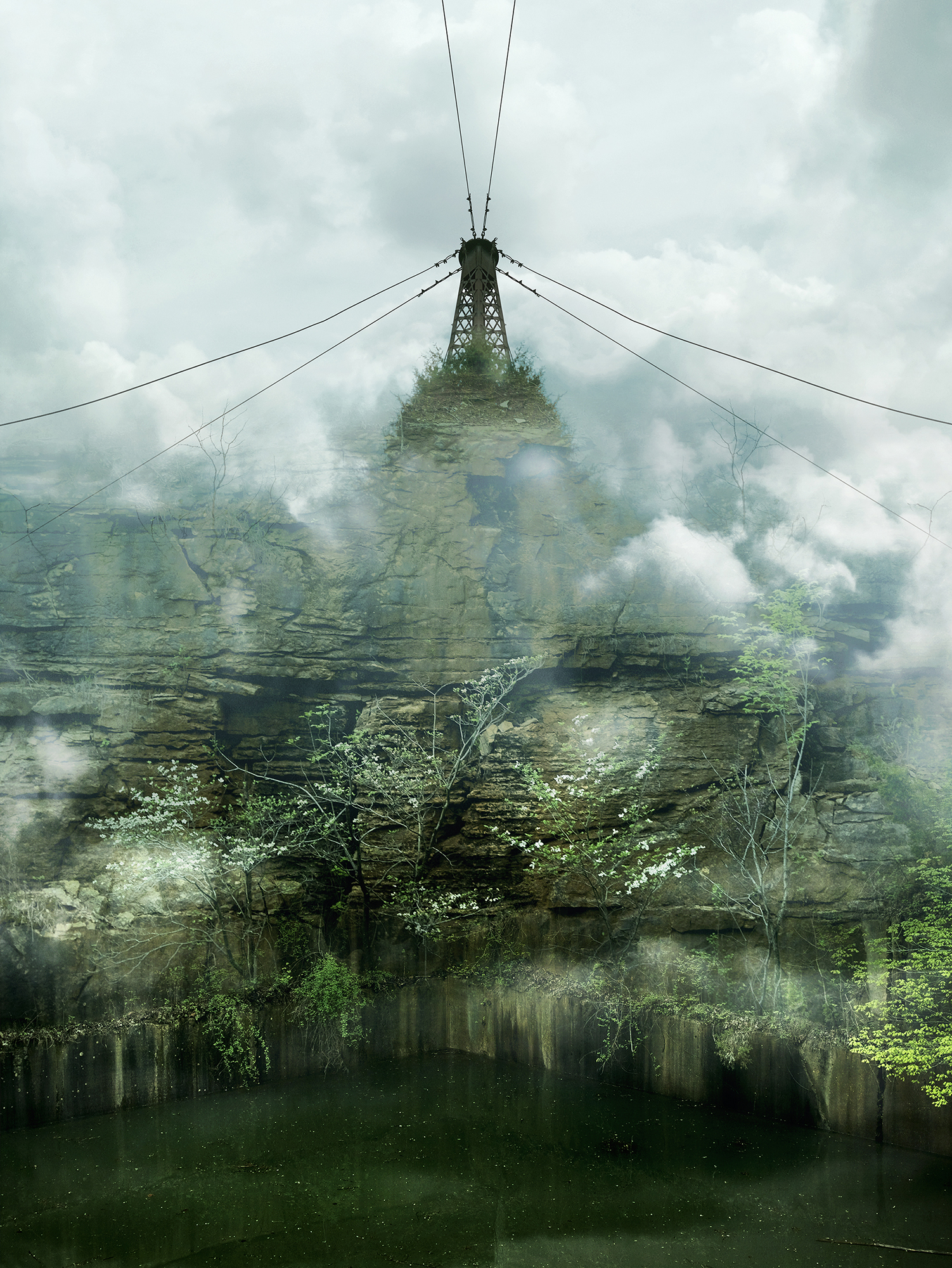 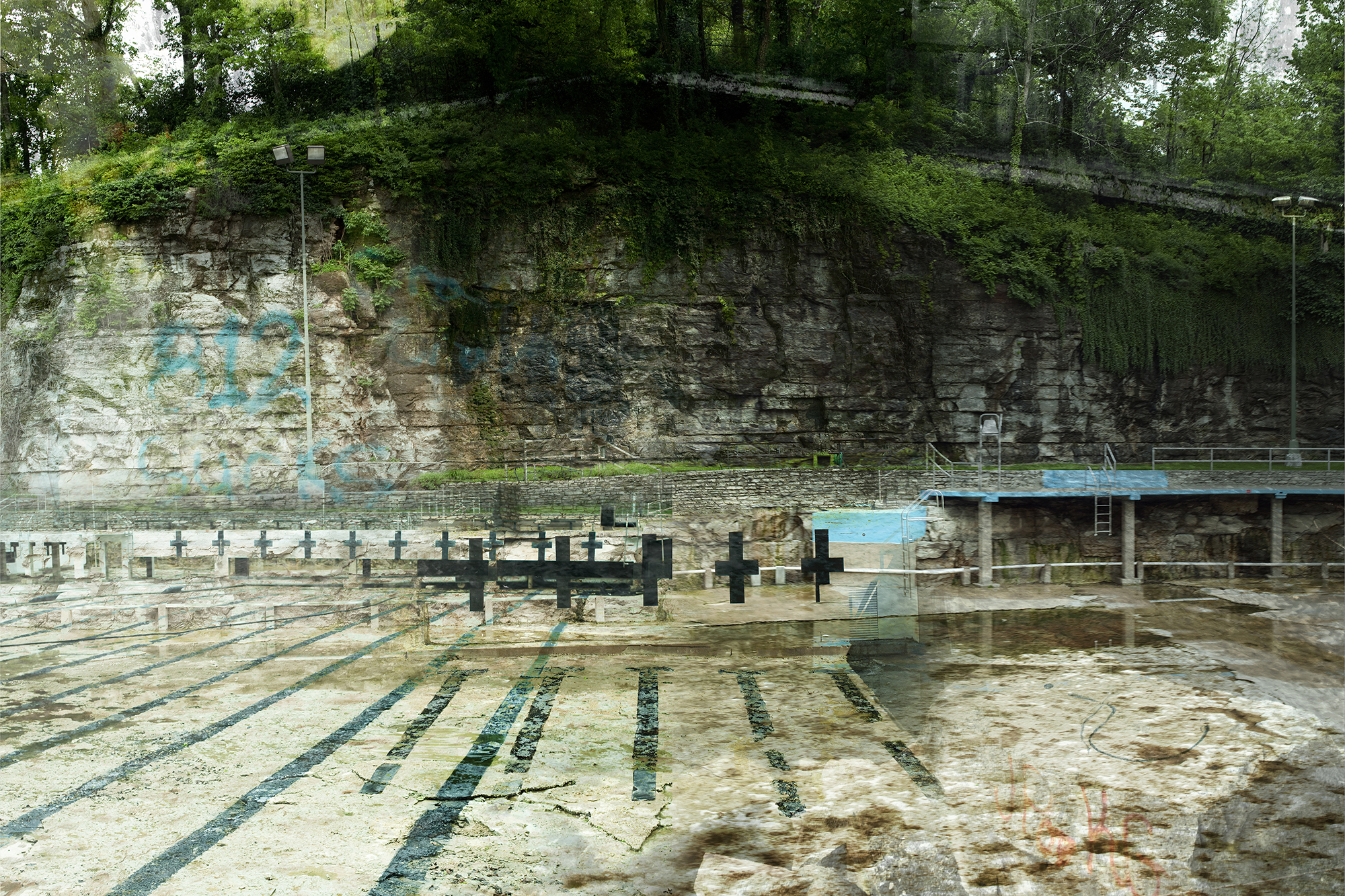 Empire Falling is artist Elena Dorfman’s series of conceptual landscape photographs exploring the abandoned and active rock quarries of the Midwest, in Kentucky, Ohio and Indiana. Using images made over the course of several years and numerous locations, the work presents a contemporary view of an ancient—though evolving—landscape. “These seemingly ordinary sites, whose aggregate is mined until the earth has nothing left to give, have been a constant source of wonder to me. What began as a sociological exploration of the communities that gather at quarries to jump from rocky precipices into water, evolved into a study of these massive pits, often overlooked and unseen. Using an archeological approach, I manipulate and reconstruct the landscape, reassembling and layering the pictures just as the oldest rock begins at the bottom and works its way up to the surface”.

As globalization and consolidation continue unchecked, these astonishing landscapes are transfigured—with landfills, golf courses, and exclusive housing communities—wherein the quarry water element has, ironically, been incorporated into the development as a scenic or recreational point of focus. The photographs from Empire Falling present the quotidian rock landscape in an unexpected way, such that the viewers’ perception is challenged not only by the imagery itself but also by their own personal subjective relationships to the industry and the evolving earth.

In 100 SUNS, photographer and bookmaker Michael Light drew on images from the declassified files of the Los Alamos National Library and the U.S. National Archives to document the era of above-ground nuclear testing in the United States, which lasted from 1945 to 1962, causing incalculable damage to land, water, and living beings. His work estranges and makes shockingly vivid the imagery of nuclear apocalypse, shaking it free of the clichés that have often neutralized the continued danger it poses. 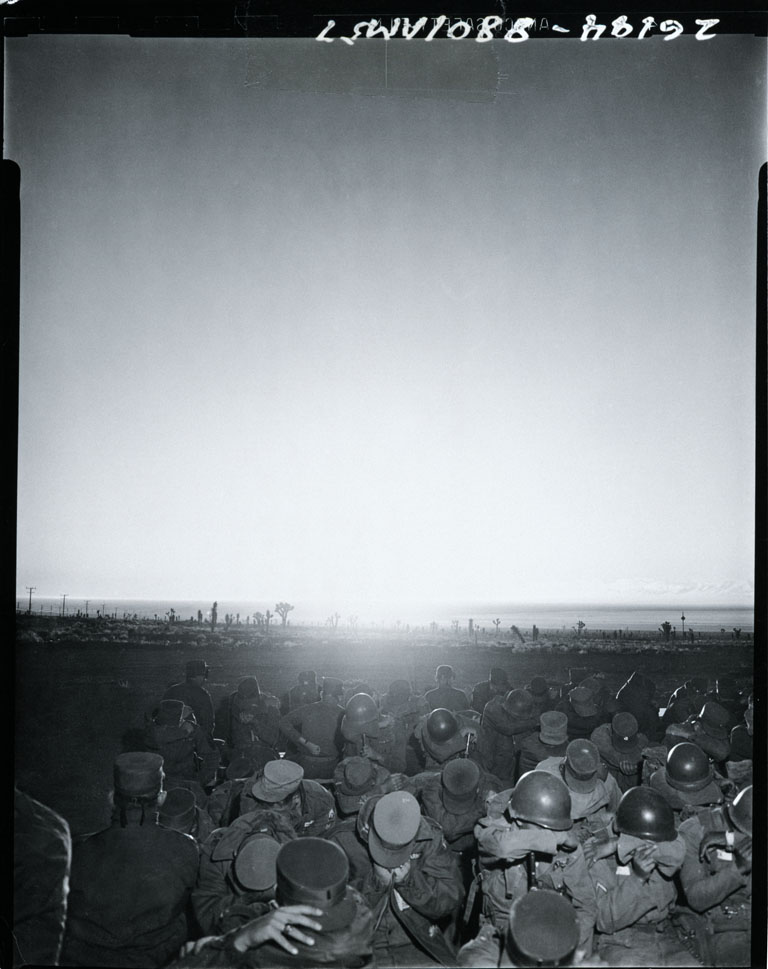 Army soldiers are atomically “conditioned” by viewing Stokes’ fireball, now 700 feet wide and more than 50 times brighter than the sun; despite their shut and shielded eyes, many saw the bones of their arms and hands.  Stokes tested the W-30 air-defense and tactical warhead, stockpiled from 1959 to 1979, variably yielding 140 tons to 19 kilotons. 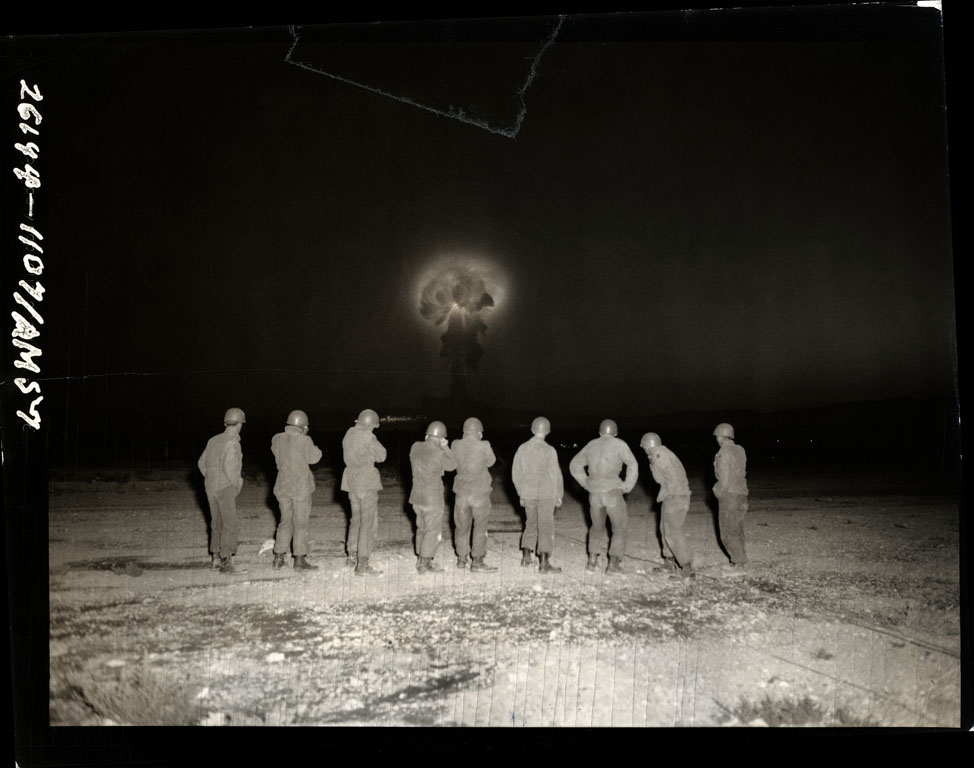 Troops watch as the cooling fireball churns upwards surrounded by a halo of ionized, glowing air.  Smoky tested a prototype of the Mark-41 bomb, which was stockpiled from 1960 to 1976, and at 25 megatons yield was the most destructive weapon the U.S. ever produced.  A single 25 megaton bomb carries the equivalent explosive power of 1,666 Hiroshima bombs. 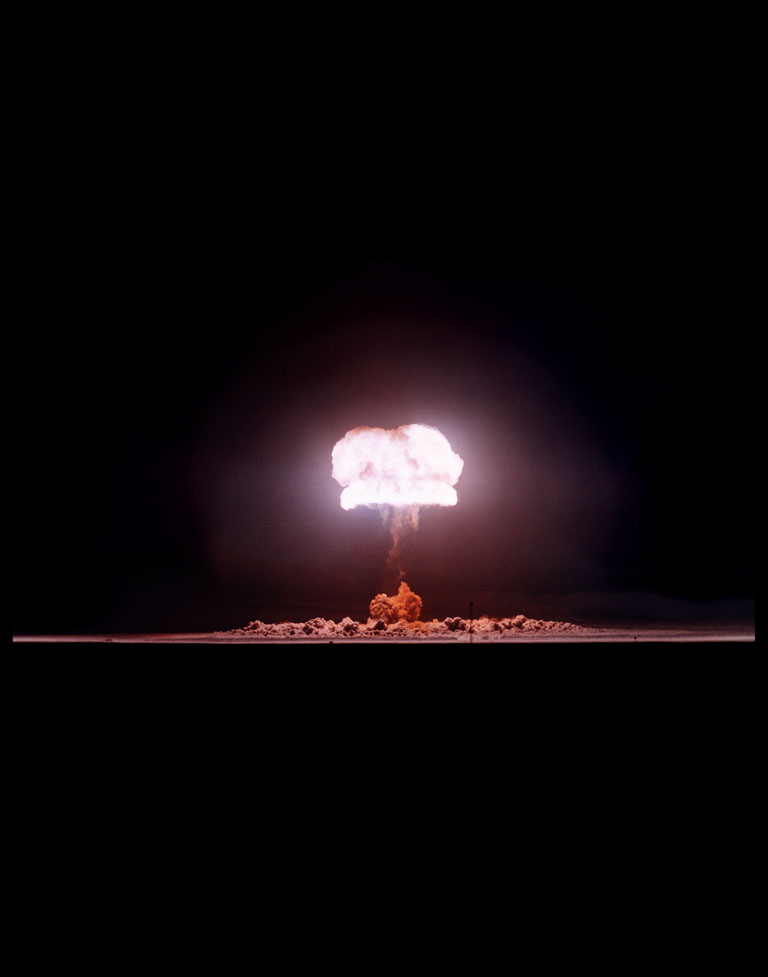 After its shock wave hits the ground and agitates soil in a broad circle, Stokes begins to draw it up in a central stem, created by atmospheric low-pressure. Stokes tested the W-30 air-defense and tactical warhead, stockpiled from 1959 to 1979, with a variable yield of 140 tons to 19 kilotons.

Zachary Skinnerʼs paintings often feature the ravaged landscapes of the near future: deserts, flooding, as well as the ingenuity of potential human responses. They constitute a powerful vision fusing traditional craft with futuristic pragmatism, dystopian environment with utopian resilience. 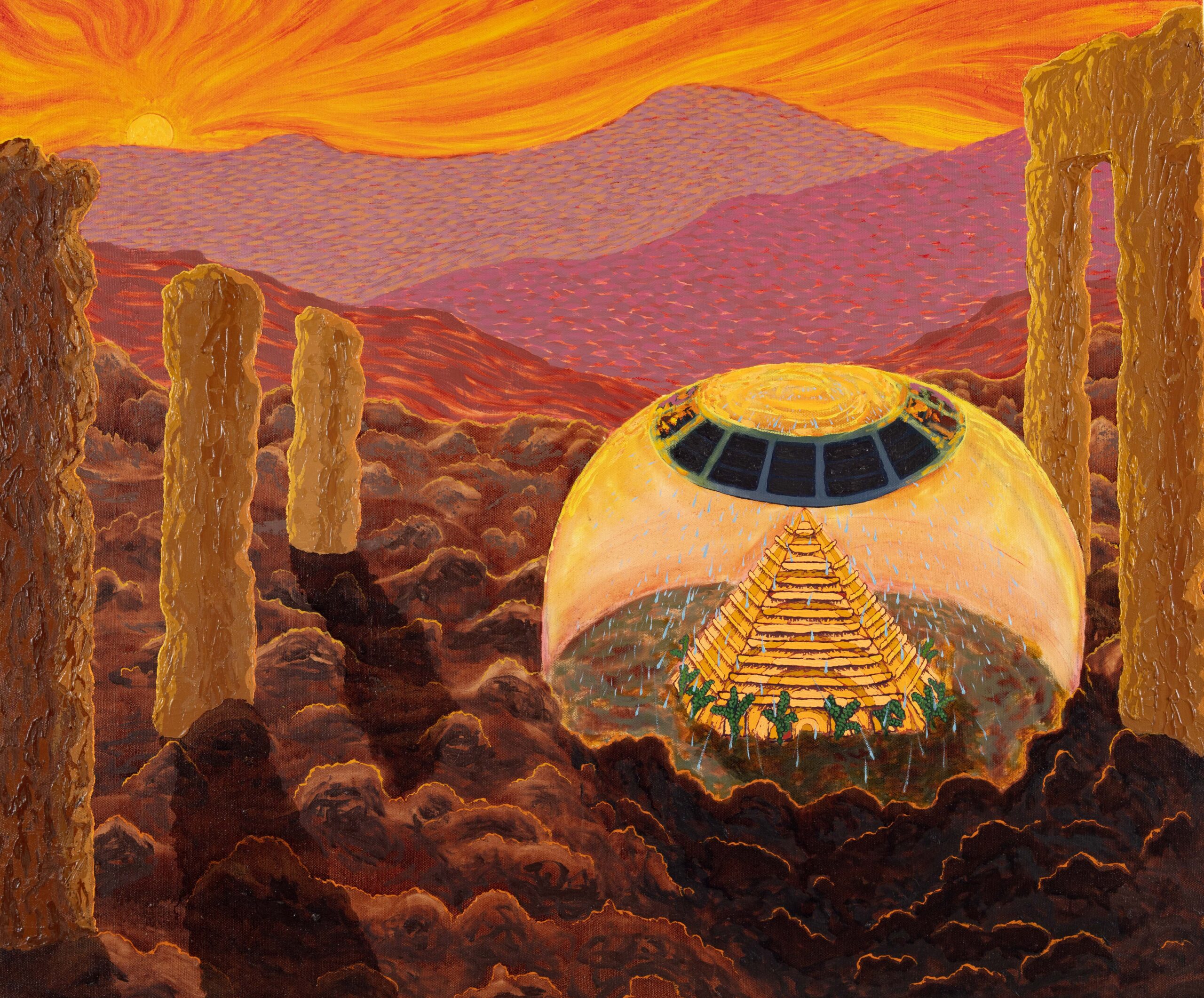 Atmosphere Bubble and Ruins in a Dead Landscape, 2019 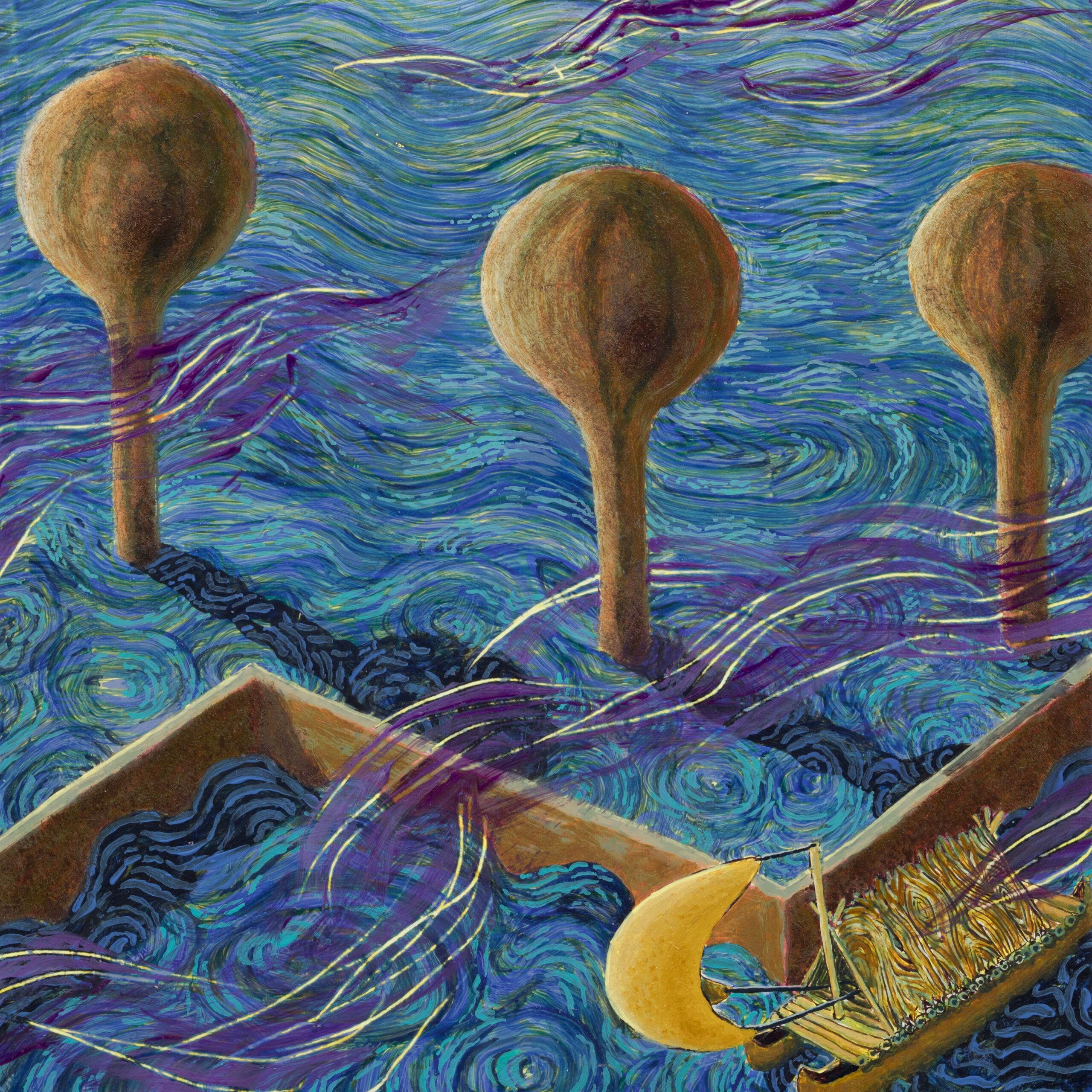 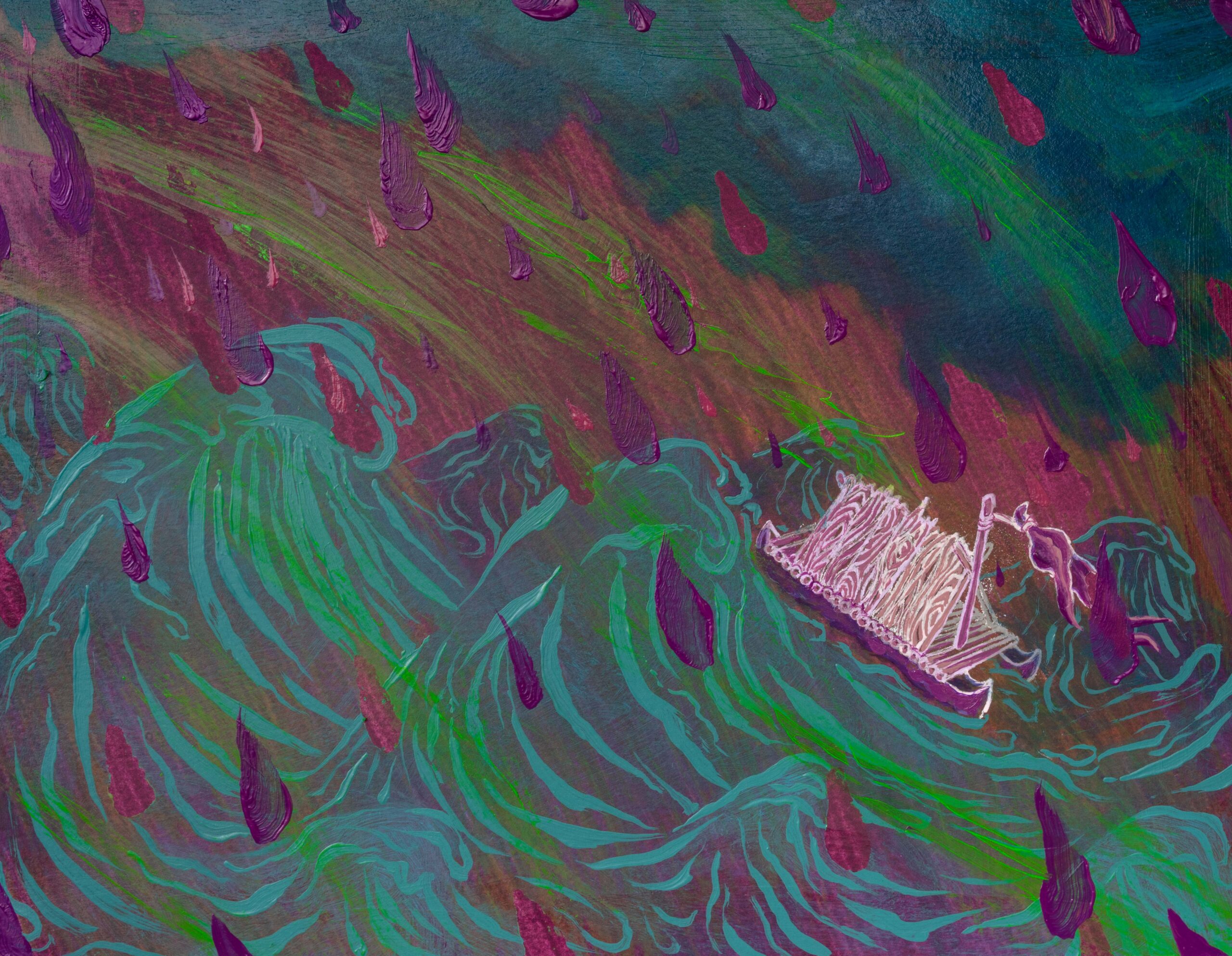 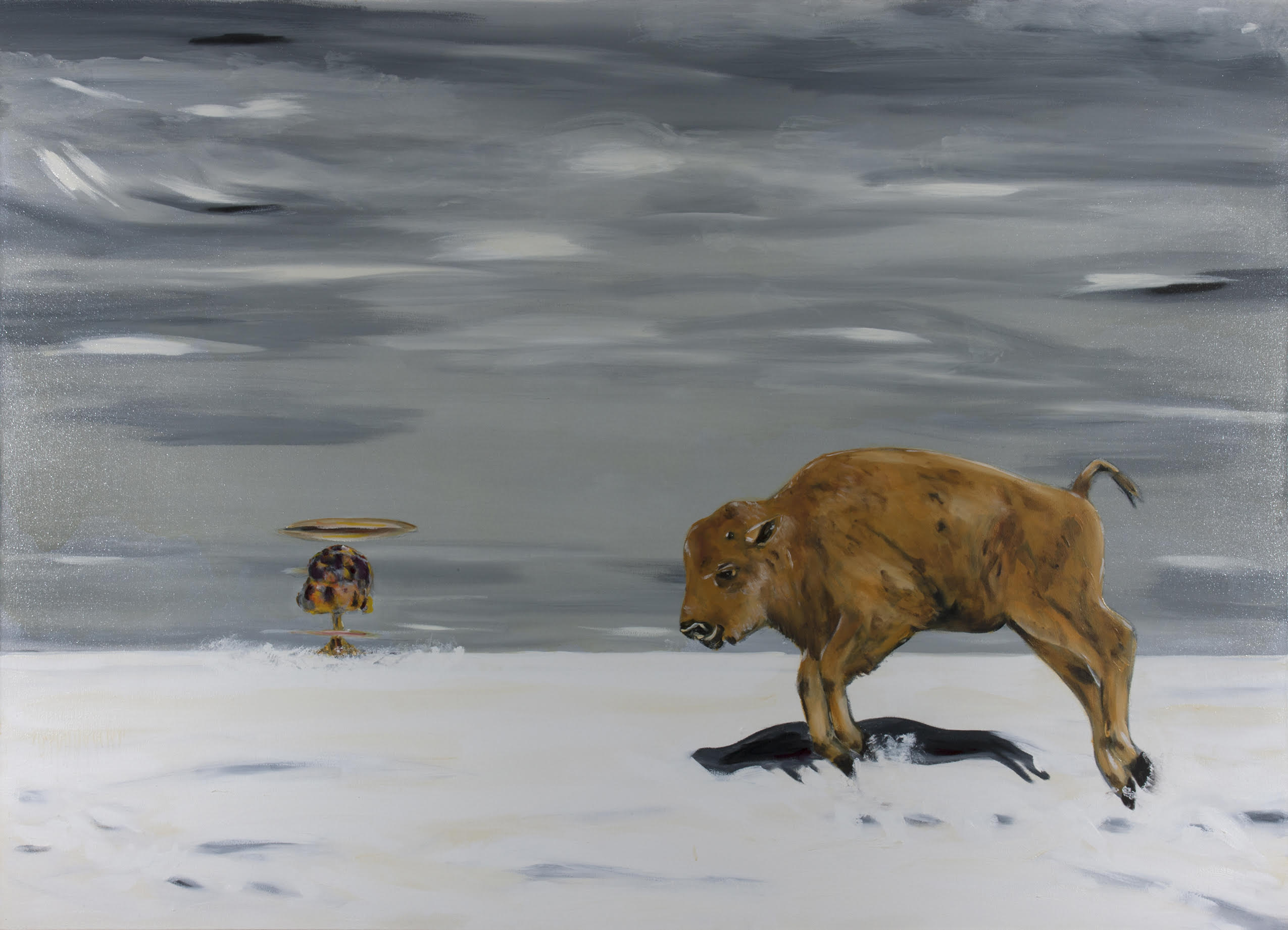 A meditation on the brutal legacy of nuclear stockpiling on the plains, on traditional Indigenous hunting grounds and buffalo migration routes.