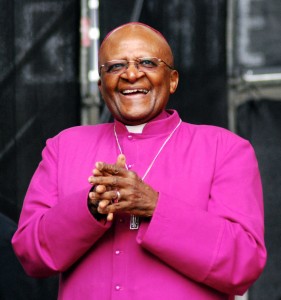 I’m writing to share some meaningful news with you. Archbishop Desmond Tutu, world-renowned spiritual leader and social activist, has endorsed the Nuclear Age Peace Foundation for the 2016 Nobel Peace Prize. This is truly a significant achievement as Archbishop Tutu is himself a past recipient of the Nobel Peace Prize and one of the world’s great moral leaders. We are honored by his belief in our work.

In his endorsement, Archbishop Tutu cited our continued global efforts (since 1982) to abolish nuclear weapons. He also endorsed the Aegean Solidarity Movement and the Club of Rome, Dr. Herman Daly and Pope Francis, saying, “What the nominations have in common is that they represent collective responses to the realities of globalization‚ finite resources and security. They underscore the inter-dependent nature of our human family.”

We will of course continue to do all we can in pursuit of a more peaceful world, free of nuclear weapons. We seek this for the people of today – our human family – and also for those of the future, so that they may all live in a peaceful and just world, free from the threat of nuclear annihilation.

Thank you for your continued support and engagement with the Foundation’s mission.