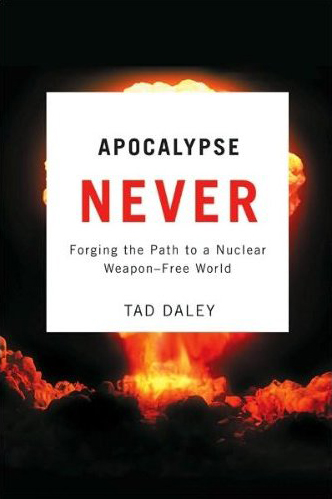 In Apocalypse Never, Forging a Path to a Nuclear Weapon-Free World (New Brunswick, NJ: Rutgers University Press, 2010), author Tad Daley explores the dangers of the Nuclear Age, argues that the only way to prevent future nuclear catastrophes is to eliminate the weapons and provides a roadmap to achieve this goal. While it is a subject that many Americans prefer to avoid or deny, the threats of nuclear devastation are all too real.

When it comes to the serious perils that nuclear weapons pose to the continuation of human civilization that has developed over the past 10,000 years, and to the human future, far too many Americans remain ignorant and apathetic. Perhaps they believe that if they do not think about nuclear dangers, the dangers will disappear. That belief is dispelled by Daley’s important book.

Apocalypse Never presents a comprehensive overview of the possibilities of nuclear terrorism, accidental nuclear war, mismanagement of a nuclear crisis, and the intentional use of nuclear weapons. One cannot read about these dangers and the close calls that have occurred in the past and remain complacent. The reality is that there must be zero tolerance for nuclear weapons proliferating to terrorist organizations, such as al Qaeda, that cannot be deterred from nuclear attack because they cannot be located. There must also be zero tolerance for accidental nuclear war or errors in crisis management that would allow a crisis to get out of control and go nuclear.

While zero tolerance is perhaps an unrealistically high standard, it is the only acceptable standard. Anything less could result in a nuclear catastrophe. And this standard must be maintained not only by the US, which has already had more than its share of slip-ups, but by all nuclear weapon states and all that may emerge in the future.

Daley points out that one of the greatest problems of the Nuclear Age is America’s nuclear hypocrisy, its double standards and its do-as-I-say-not as-I-do approach to international treaties and relations among countries. The US, for example, has one standard for its ally Israel’s nuclear arsenal (tolerance and silence) and another for countries such as Iraq and Iran (preventive war and regime change, and threat of attack, respectively). As any parent knows, double standards don’t hold up over time.   As a result, America is failing in what is perhaps its most important leadership role. It is failing to discipline its policy to a single standard for all, including itself, a standard that must be zero nuclear weapons rather than zero tolerance only for the countries disapproved of by the US.

Roughly half of Daley’s book elucidates the dangers of continuing with the nuclear status quo. It is clear, to quote William Butler Yeats, “Things fall apart; the center cannot hold….” Either the world will spin off toward nuclear proliferation and nuclear catastrophe; or, as a far preferable alternative, we will eliminate nuclear weapons from the world. The latter alternative is the subject of the second half of Apocalypse Never. It is the alternative that common sense and rationality dictate.  It is also dictated by international law, specifically by Article VI of the Nuclear Non-Proliferation Treaty (NPT), which calls for the “good faith” pursuit of nuclear disarmament. This was the principal trade-off in the treaty, promised by the nuclear weapon states to the non-nuclear weapon states, the vast majority of the countries in the world that agreed not to manufacture or otherwise acquire nuclear weapons.

As Daley rightly points out, the NPT should properly have been named the Nuclear Non-Proliferation and Elimination Treaty. Adding the word “elimination” to the title of the treaty would have made it readily understandable to the public that the treaty was not only about non-proliferation, but also about eliminating the existing weapons. The International Court of Justice, the world’s highest court, advised in 1996 that the nuclear weapon states have an obligation to complete the task of achieving nuclear disarmament in all its aspects.

Of course, it will not be easy to eliminate all nuclear weapons in the world; it is, in fact, the great challenge that we face in the Nuclear Age. Daley makes a strong case, however, that this is a goal that can be accomplished. He assesses the dangers of a “breakout” scenario and finds that a structure could be established with sufficient disincentives so that the costs of breakout would far exceed the benefits. The path we are currently on is nearly certain to lead to future catastrophes.

Those who think about the future and have a role in designing it must not shy away from the conclusion, reached by the survivors of Hiroshima and Nagasaki, that nuclear weapons and human beings cannot co-exist. The weapons are incompatible with a human future. They put all humanity on the endangered species list. We need to awaken to this reality and then, in Daley’s vision, “build the architecture of a nuclear weapon-free world.”

Another way in which Daley conceptualizes our choices is: apocalypse soon or, as the book is titled, Apocalypse Never. When it comes to nuclear apocalypse, there is no place for neutrality or complacency. It is a life-or-death struggle between humans and the tools we have created, the long-distance devices of mass annihilation we call nuclear weapons. These weapons challenge our humanity. The mere existence of these weapons is a call to action.

Daley’s book provides the background and the vision for individuals to become informed and effective citizens of the Nuclear Age and to fulfill our shared responsibility to pass the world on intact to the next generation. We are the first generation in human history to run the risk of failing in that responsibility. To assure that we succeed, individuals must become agents of change.  The existential threat of nuclear weapons is not an issue for leaders alone. In fact, the issue is far too important to be left only in the hands of leaders. The people must care enough to lead their leaders.

Apocalypse Never takes the abolition of nuclear weapons out of the realm of utopian dream, pointing the way to a citizen-led political project. I urge you to read this book and, in the interests of all humanity, to become engaged in the great goal of ridding the world of nuclear weapons.