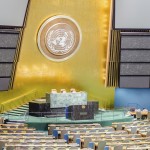 Every moment of every day, all of humanity is held hostage by the nuclear nine. The nine nuclear nations are made up of the P5 permanent members of the United Nations Security Council and their illegitimate nuclear wannabes Israel, North Korea, India and Pakistan spawned by the mythological theory of deterrence. This theory has fueled the nuclear arms race since its inception wherein if one nation has one nuclear weapon, its adversary needs two and so on to the point that the world now has 15,700 nuclear weapons wired for immediate use and planetary destruction with no end in sight. This inaction continues despite the forty-five year legal commitment of the nuclear nations to work toward complete nuclear abolition. In fact just the opposite is happening with the U.S. proposing to spend $1 trillion dollars on nuclear weapons modernization over the next 30 years fueling the “deterrent” response of every other nuclear state to do likewise.

This critical state of affairs comes as the 189 signatory nations to the Treaty on the Non-Proliferation of Nuclear Weapons (NPT) concluded the month long Review Conference at the U.N. in New York. The conference was officially a failure due to the refusal of the nuclear weapons states to present or even support real steps toward disarmament with an unwillingness to recognize the peril that the planet faces at the end of their nuclear gun and continuing to gamble on the future of humanity. Instead presenting a charade of concern, blaming each other and bogging down in discussions over a glossary of terms while the hand of the nuclear Armageddon clock continues to move ever forward.

The nuclear weapons states have chosen to live in a vacuum, one void of leadership. They hoard suicidal nuclear weapons stockpiles and ignore recent scientific evidence of the humanitarian impact of nuclear weapons that we now realize makes these weapons far more dangerous than we thought before. They fail to recognize that this evidence must be the basis for prohibiting and eliminating them.

Fortunately there is a powerful and positive response coming out of the NPT Review Conference. The Non-Nuclear Weapons States representing a majority of people living on the planet frustrated and threatened by the nuclear nations have come together and demanded a legal ban on nuclear weapons like the ban on every other weapon of mass destruction from chemical to biologic and including land mines. Their voices are rising up. Following a pledge by Austria in December 2014 to fill the legal gap necessary to ban these weapons, 107 nations have joined them at the U.N. this month committing to do so. That means finding a legal instrument that would prohibit and eliminate nuclear weapons. Such a ban will make these weapons illegal and will stigmatize any nation that continues to have these weapons as being outside of international law.

Costa Rica’s closing NPT remarks noted, “Democracy has not come to the NPT but Democracy has come to nuclear weapons disarmament.” The nuclear weapons states have failed to demonstrate any leadership toward total disarmament and in fact have no intention of doing so. They must now step aside and allow the majority of the nations to come together and work collectively for their future and the future of humanity. John Loretz of the International Campaign to Abolish Nuclear Weapons said, “The nuclear-armed states are on the wrong side of history, the wrong side of morality, and the wrong side of the future. The ban treaty is coming, and then they will be indisputably on the wrong side of the law. And they have no one to blame but themselves.”

“History honors only the brave,” declared Costa Rica. “Now is the time to work for what is to come, the world we want and deserve.”

Ray Acheson of Women’s International League for Peace and Freedom says, “Those who reject nuclear weapons must have the courage of their convictions to move ahead without the nuclear-armed states, to take back ground from the violent few who purport to run the world, and build a new reality of human security and global justice.”