This article was originally published by Common Dreams. 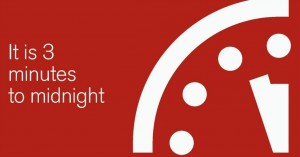 The Bulletin of the Atomic Scientists has just announced its latest nuclear Doomsday Clock moving ahead the minute hand to three minutes till midnight. The clock represents the count down to zero in minutes to nuclear apocalypse – midnight. This significant move of TWO minutes is the 22nd time since its inception in 1947 that the time has been changed.

In moving the hand to 3 minutes to midnight, Kennette Benedict the Executive Director of the Bulletin, identified in her comments: “the probability of global catastrophe is very high”… “the choice is ours and the clock is ticking”…”we feel the need to warn the world” …”the decision was based on a very strong feeling of urgency”. She spoke to the dangers of both nuclear weapons and climate change saying, “they are both very difficult and we are ignoring them” and emphasized “this is about doomsday, this is about the end of civilization as we know it”. The Clock has ranged from 2 minutes to midnight at the height of the Cold War to 17 minutes till midnight with the hopes that followed the end of the Cold War. The decision to move the minute hand is made by the Bulletin’s Board of Directors in consultation with its Board of Sponsors, which includes 18 Nobel Laureates.

What is clear is that the time to ban nuclear weapons is now. Today’s announcement by the Bulletin further corroborates the dangers confirmed by recent climate science. These studies identify the much greater dangers posed by even a small regional nuclear war using just 100 Hiroshima size bombs out of the 16,300 weapons in today’s global stockpiles. The ensuing dramatic climate changes and famine that would follow threaten the lives of up to 2 billion on the planet with effects that would last beyond 10 years. There is no escaping the global impact of such a small regional nuclear war.

Medical science has weighed in on the impacts and devastation of even the smallest nuclear explosion in one of our cities and the reality is there is no adequate medical or public health response to such an attack. We kid ourselves into a false sense that we can prepare and plan for the outcome of a bomb detonation. Every aspect and facet of our society would be overwhelmed by a nuclear attack. Ultimately the resultant dead at ground zero would be the lucky ones.

Probability theorists have long calculated the dismal odds that the chance for nuclear event either by plan or accident are not in our favor. Recent documents obtained through the Freedom of Information Act detail over 1000 mishaps that have happened in our nuclear arsenals. Time is not on our side and the fact that we have not experienced a nuclear catastrophe is more a result of luck than mastery and control over these immoral weapons of terror.

The time to act is now. There is so much that can and must be done. Congress will soon begin budget debates that include proposals to increase nuclear weapons spending for stockpile modernization by $355 Billion over the next decade and up to a Trillion in the next 30 years. Expenditures for weapons that can never be used and at a time when the economic needs for our country and world are so great.

Around the world, there is a growing awareness of the humanitarian impact of nuclear weapons, and a corresponding desire to rid the world of these weapons.The Vienna Humanitarian Impacts of Nuclear Weapons conference last month saw 4/5 of the nations of the world participating. In Oct., 2014, at the UN, 155 nations called for the elimination of nuclear weapons. At Vienna, 44 nations plus the pope advocated for a treaty banning nuclear weapons.

The people are making their voices heard and demanding a change of course from the status quo.

In this week’s State of the Union address, President Obama emphasized that we are one people with a common destiny. He said this both in reference to our nation and our world. The threat of nuclear weapons unites us even as it threatens our very existence. This reality can also be remembered in the words of Martin Luther King when he said,

“We must all learn to live together as brothers or we will all perish together as fools. We are tied together in the single garment of destiny, caught in an inescapable network of mutuality. And whatever affects one directly affects all indirectly.”

The time for action is now, before it is too late. It’s 3 minutes till midnight.

This work is licensed under a Creative Commons Attribution-Share Alike 3.0 License

Robert Dodge is a family physician practicing full time in Ventura, California. He serves on the board of Physicians for Social Responsibility Los Angeles serving as a Peace and Security Ambassador and at the national level where he sits on the security committee. He also serves on the board of the Nuclear Age Peace Foundation and Citizens for Peaceful Resolutions. He writes for PeaceVoice.