Welcome to the 14th annual Frank K. Kelly Lecture on Humanity’s Future, a project of the Nuclear Age Peace Foundation.

I want to thank our sponsors for tonight’s event and make special mention of our principal sponsors: The Santa Barbara Foundation and the Terry and Mary Kelly Foundation. I also want to thank all of you for being here tonight and for caring about humanity’s future. 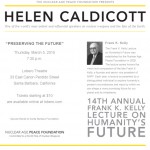 The Kelly Lecture Series honors the vision and compassion of Frank K. Kelly, a founder and long-time senior vice president of the Nuclear Age Peace Foundation. Frank believed deeply that everyone deserves a seat at humanity’s table. He gave the first lecture in the series in 2002 on the subject, “Glorious Beings: What We Are and What We May Become.” Just the title of his talk gives you an idea of his unbounded optimism.

For this Lecture series, the Foundation invites a distinguished speaker each year. Recent Kelly Lecturers have included Noam Chomsky, Dennis Kucinich and Daniel Ellsberg. Other lecturers in the series include Dame Anita Roddick, Frances Moore Lappe and Mairead Corrigan Maguire. You can find a complete list of the lecturers and their lectures on-line, as well as other information on the Foundation, at www.wagingpeace.org.

The Kelly Lecture is one of many projects of the Nuclear Age Peace Foundation. Other major projects include consulting with the Marshall Islands on their Nuclear Zero lawsuits against the nine nuclear-armed countries. These David versus Goliath lawsuits seek no compensation, but rather ask the Courts to order the nuclear-armed countries to fulfill their obligations under international law to negotiate in good faith for an end to the nuclear arms race and for nuclear disarmament.

Another of our projects is exploring the moral reasons to abolish nuclear weapons, and to break the bonds of complacency that have led in the Nuclear Age to putting the future of humanity into the hands of so-called nuclear “experts” and policy makers, a most dangerous nuclear “priesthood.”

The most important of these moral reasons is that we are putting all of Creation at risk of extinction. Could there be a greater crime or moral shortcoming? It is the multiplication of homicide by more than seven billion. It is moving beyond homicide and genocide to omnicide, the death of all.

Let me share with you a quote from humanistic philosopher Erich Fromm: “For the first time in history, the physical survival of the human race depends on a radical change of the human heart.”

Our lecturer tonight has worked for over four decades to create this radical change in the human heart. She is a passionate and committed advocate of a nuclear weapons-free world. She is a medical doctor, a pediatrician, from Australia who works to save the world’s children and, with them, the rest of us. She has diagnosed the severe societal disease of “nuclearism” and has advocated its cure through nuclear abolition.

Dr. Caldicott is a recipient of the Nuclear Age Peace Foundation’s Distinguished Peace Leadership Award, and has served as a member of our Advisory Council since 1994. She was nominated for the Nobel Peace Prize by two-time Nobel recipient Linus Pauling. The Smithsonian has named her one of the most influential women of the 20th century.

She has just organized and held a vitally important symposium in New York on “The Dynamics of Possible Nuclear Extinction.” I was privileged to be one of the speakers at the symposium, which took place this past weekend at the New York Academy of Medicine.

Tonight Dr. Caldicott will be speaking on “Preserving Humanity’s Future.” It is my pleasure to introduce our 2015 Kelly Lecturer, Dr. Helen Caldicott.

(The video of Dr. Caldicott’s lecture will be at this link. DVD copies will also be available to use for public screenings. For further information, contact Rick Wayman at rwayman@napf.org.)